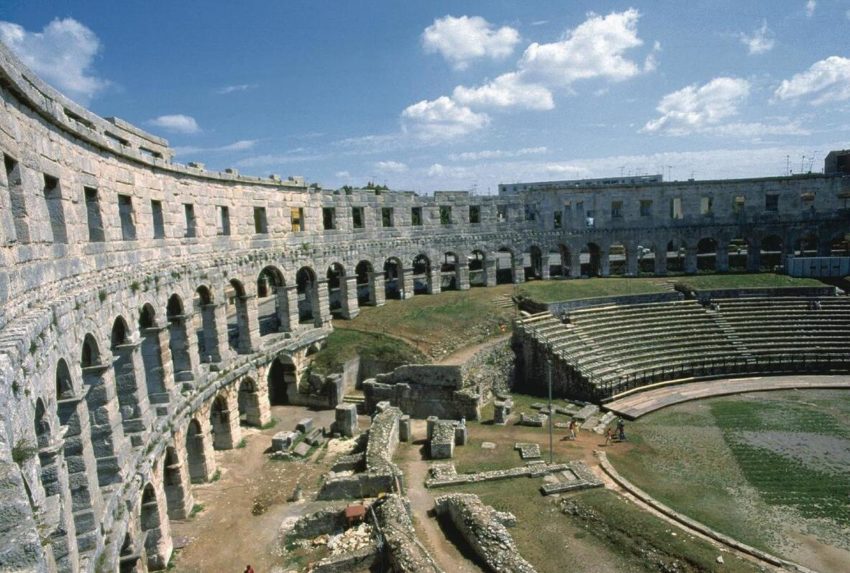 Within the area that is today Croatia there are several significant memories of Roman times. From the 1st century AD, the great amphitheater, the Temple of Augustus and the triumphal arch originate in the town of Pula on Istra. Diocletian’s Palace in Split, built approx. 300 possibly, are partly well preserved and today form the center of the old town. Noteworthy are the peristyle with colonnades and an Egyptian sphinx, the vaulted basements and the city gates. Outside Split are the remains of the Roman city of Solina with amphitheater, aqueduct and terms. The Roman forum in Zadar is well kept.

From the Byzantine period (535–550), the Euphrasisus basilica of Poreč on Istra originates with magnificent mosaics. The oldest parts of the church date back to the 20th century.

The oldest Slavic (Old Croatian) buildings are small churches (about 100) along the Adriatic coast. These pre- Roman churches (800-1000s) are built so that the sunlight falls into the church on the day of the patron saint of the church. An example is the small church in Nin, outside Zadar. Monumental is the St. Donat Church in Zadar from the 8th century, the foremost building of the Croatian medieval kingdom. The rich stone ornaments and reliefs of this period, as the head of Višeslav’s baptismal font in Nin (ca. 800), testify to high culture. Frescoes exist from the 11th century and richly decorated book manuscripts.

From the Roman period, from the end of the 1000s, Croatian architecture and art follow the European style. Many towns along the Adriatic have Romanesque-style buildings and bells, such as Poreč, Rab, Zadar, Šibenik, Trogir, Split and Dubrovnik. Examples of sculpture from this period are the portal in the Cathedral of Split, carved in wood by Andrija Buvina in 1214, and the church portal in Trogir, made by the local master Radovan in 1240, with sculptures by Adam and Eve of almost full size. The Romanesque-Gothic monastery in the Franciscan monastery in Dubrovnik was created by Mihoje Brajkov in 1330.

The painting school in Split mixed Western European and Byzantine style. The influence of Venice and other Italian cultural centers was strong. In Dubrovnik there are several Gothic buildings and among others the Orlando pillar, made by a master from Milan in 1413. In most cities along the Adriatic there are Gothic monasteries and churches. In Zagreb, the cathedral was built in the Gothic style in the mid-13th century. In Zadar, gold and silversmiths flourished, which can be seen in magnificent gold sarcophagi and relics. The most original painter of the late Gothic period was Blaž Jurjev of Trogir (c. 1390–1450). miniature art book manuscripts were also high. Original frescoes including dance of death can be found in the village church of Beram on Istra, painted by Vincent from Kastav in 1474.

The Renaissance flourished along the Adriatic coast in the 1400s and especially the 1500s, in close connection with Italian art. In Šibenik, Juraj Dalmatinac built the cathedral (second half of the 1400s) in a mixture of Gothic and Renaissance, with an exterior frieze consisting of 72 heads, portraits of the city’s citizens. The Renaissance is also marked in the Split Cathedral with frescoes by Duje Vušković from 1427. In several places citadel and fortified noble castles were built, due to the danger of the Turks threatening from the east.

The city walls of Dubrovnik were started by the Florentine Michelozzo Michelozzi in the 1400s, continued by Juraj Dalmatinac, who built the impressive Minčeta Tower (c. 1450), and completed in the 1500s. Outside the city wall is the Lovrijenac Fort. Within the city walls, the finest examples of Renaissance buildings in Croatia were erected: the Divona or Sponza Palace (1516), Our Savior’s Church (1529) and the Prince’s Palace (second half of the 16th century). The foremost painter from Dubrovnik was Nikola Božidarević (1460-1517). There are also examples of Renaissance architecture inland. The city of Karlovac, begun in 1579 by the Austrians as a border fortress against the Turks, was built in the Renaissance style. The Veliki Tabor nobility seat in the Zagorje area north of Zagreb is another example of a fortified Renaissance building.

The Baroque is typical of the northern part of Croatia, although there are also significant Baroque buildings in Dubrovnik, erected after the earthquake in 1667 (Jesuit Monastery, Cathedral and St. Vlaho Church). Northern Croatia, the Zagreb region and Slavonia, were completely characterized by the Baroque, such as the city of Varaždin. In each city there are churches, town halls and baroque-style palaces. An example is the Eltz Palace in Vukovar (destroyed during the 1991 war). The most significant Baroque painter was Ivan Ranger (c. 1700–1753), who among other things made the rich decorations of the Church of the Virgin Mary in the snow, in Belec.

In the 19th century, Zagreb became the leading art center. The architecture was characterized by Viennese style and historical styles. The Zagreb University Library, built in 1913 by Rudolf Lubinski (1873-1935), is an important example of Art Nouveau style. The art of painting evolved from romance to realism, historical national romance and impressionism.

The foremost sculptor of the 19th century was Ivan Rendić (1849-1932). At the exhibition in Rome in 1911, the sculptor Ivan Meštrović (1883–1962) won European reputation. He combined classical and modern elements, influenced by Auguste Rodin and Austrian modernism, and has created a large number of monumental sculptures, monuments, chapels and the like, scattered throughout the former Yugoslavia. Meštrović museums can be found in his hometown of Split and in Zagreb. Another prolific sculptor was Toma Rosandić (1878–1958).

The Zagreb group Jord, founded in 1929, was socially engaged, led by Krsto Hegedušić (1901–1975), who, with expressionist naivism, expressed protest against the absurdity of the war. Inspired by this group, the Hlebine School was founded by naivist painters, whose leading name is Ivan Generalić (1914–1992). The same school belongs to Ivan Lacković-Croata (1932–2004) and Mijo Kovačević (1935–). Another naivist painter is Ivan Rabuzin (1921–2008). 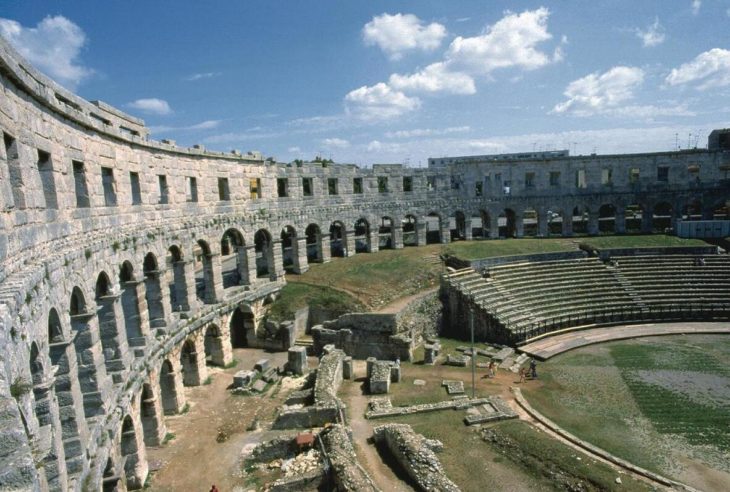