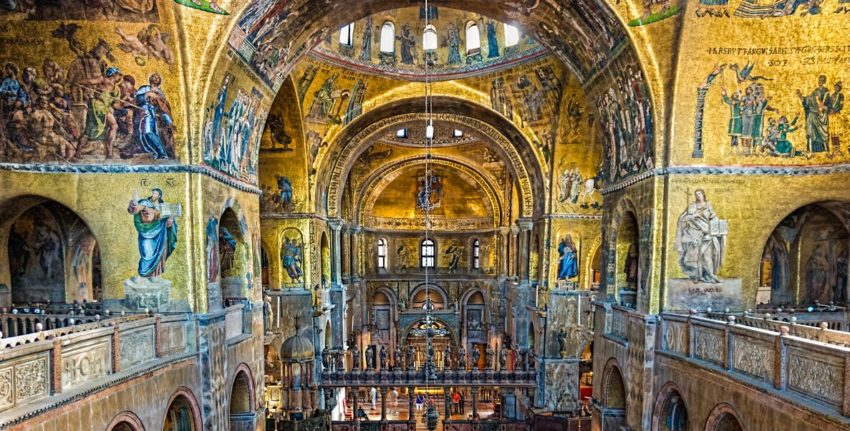 When the migrations around the year 400 AD overturned the West Roman Empire, classical art on Italian soil had long since dissolved. But the legacy of antiquity was to break forth and create new highlights in the development of Italian art. 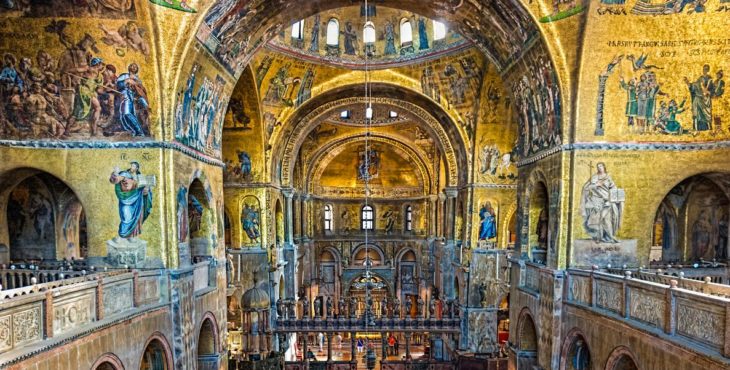 As in the other countries of Europe, the art of this period is mainly related to the church and ecclesiastical architecture. With roots in early Christian and Byzantine art, it gained a development that in several ways distinguishes it from other European medieval art. A large number of frescoes and mosaic paintings were created in the period 600–1200; in Rome, Ravenna and elsewhere.

Wall murals in the small church of Santa Maria in Castelseprio in Lombardy show that Roman-Hellenistic traditions lived on in the years 600–900. Greek artists were also called in, as in Sant’Angelo in Formis, near Capua, and an Eastern-style Italian style emerged in the 12th and 13th centuries, the mannera bizantina or the mannera greca. This style spread throughout Italy and forms the basis for the further Italian painting. Thus, when Pope Honorius 3 convened artists from Venice in 1218, a Byzantine character prevailed in the mosaics and frescoes that the popes had performed in and around Rome.

In Venice, the Basilica of San Marco (St. Mark’s Church), begun in 1063, was equipped with numerous Byzantine-style wall and dome mosaics. Fine mosaics were also created in Murano’s and Torcellos cathedrals near Venice. In Sicily, the Byzantine influence appeared in the palaces and churches of Palermos, Monreales and Cefalù, where the rooms were equipped with marble cladding and mosaic decorations.

In Lombardy, figurative and ornamental relief sculpture in the Romanesque style was performed in the 11th and 11th century, linked to contemporary pebble architecture in Sant’Ambrogio in Milan, San Michele in Pavia, the cathedrals in Ferrara, Parma and more. The Lombard building sculpture was often placed at or around a window or portal, and quickly evolved to include circular sculpture. 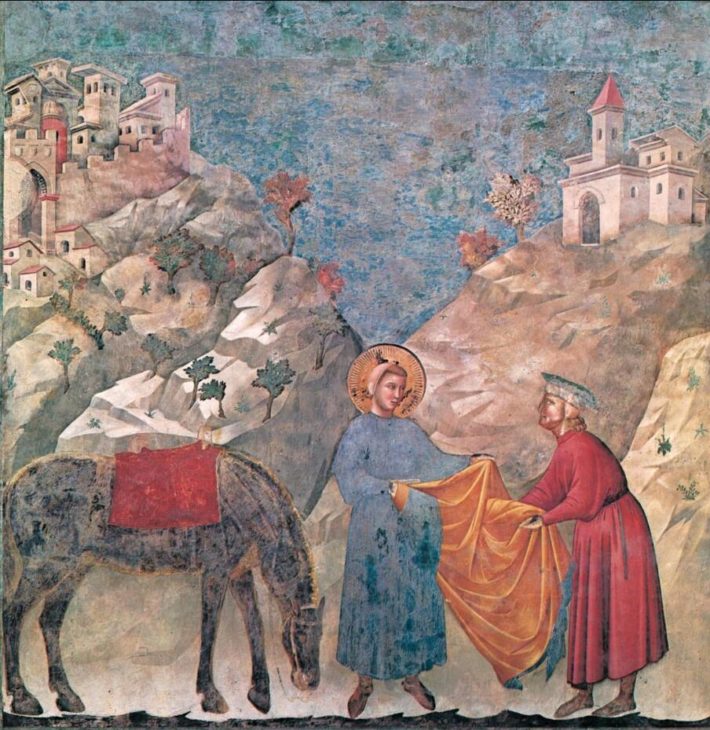 In painting, a new style emerged in Tuscany towards the end of the 13th century. The great innovator was Giotto di Bondone, who is known for his frescoes in San Francesco in Assisi and in Santa Maria dell’Arena in Padova. He developed a large-scale plastic style, with dramatic composition and in a more real-life form, and led the trend towards the Renaissance. Here we see a fresco of Saint Francis sharing his robe, from the upper church of San Francesco in Assisi, 1296-99.

Gothic did not have the importance of art in Italy as in the rest of Western Europe. The period is often called by the terms duecento (13th century) and trecento (13th century). In the 13th century, Tuscany took the lead in art development. The renaissance was laid in Florence, Padova, Pisa and Siena. In the fast-growing city-states, the artists gradually began to liberate themselves from the church and monastery and set up their own workshops. Rome also experienced an upswing as an art city; numerous churches were decorated with murals and mosaics, partly in connection with early Christian art, but also with classical inspired forms.

Roman classicism and French gothic coincide as two parallel lines in Tuscan sculpture in the late 13th century. Niccolò Pisanos (1225–78 / 87) reliefs on the pulpits of the Baptistery at the Cathedral of Pisa and at the Cathedral of Siena were inspired by Roman sarcophagus sculpture. His sacred figures appear as portraits of ancient gods and philosophers. His son Giovanni Pisano (1245-1317) represents the Gothic direction and his figurative representations are influenced by French Gothic cathedral sculpture.

Cimabue (1240–1302) painted his throning Madonna and Saints with greater volume and plasticity than his predecessors, but otherwise followed the Byzantine pattern. He worked, among others, in the Basilica di San Francesco in Assisi, where several leading frescoes were assembled, including Pietro Cavallini (1250–1330) and Jacopo Torriti. Their foremost source of inspiration was Late Roman and early Christian frescoes.

Siena became the center of a thriving painting school; a leading artist was Duccio di Buoninsegna (1255-1319). In intimate contact with French art, his images gained a lyrical feel. His Madonna’s are freer and more freely produced than Cimabues and are set in an architectural environment.

The decisive effort was nevertheless made by the Florentine Giotto di Bondone (1266–1337). In his frescoes with scenes from Jesus’ life in the Arena Chapel in Padova (1305–06), the course of events and human relationships are portrayed with a dramatic expression. His representations have a new depth dimension, created with the help of perspective lines and shadow effects that emphasize the plasticity of the characters.