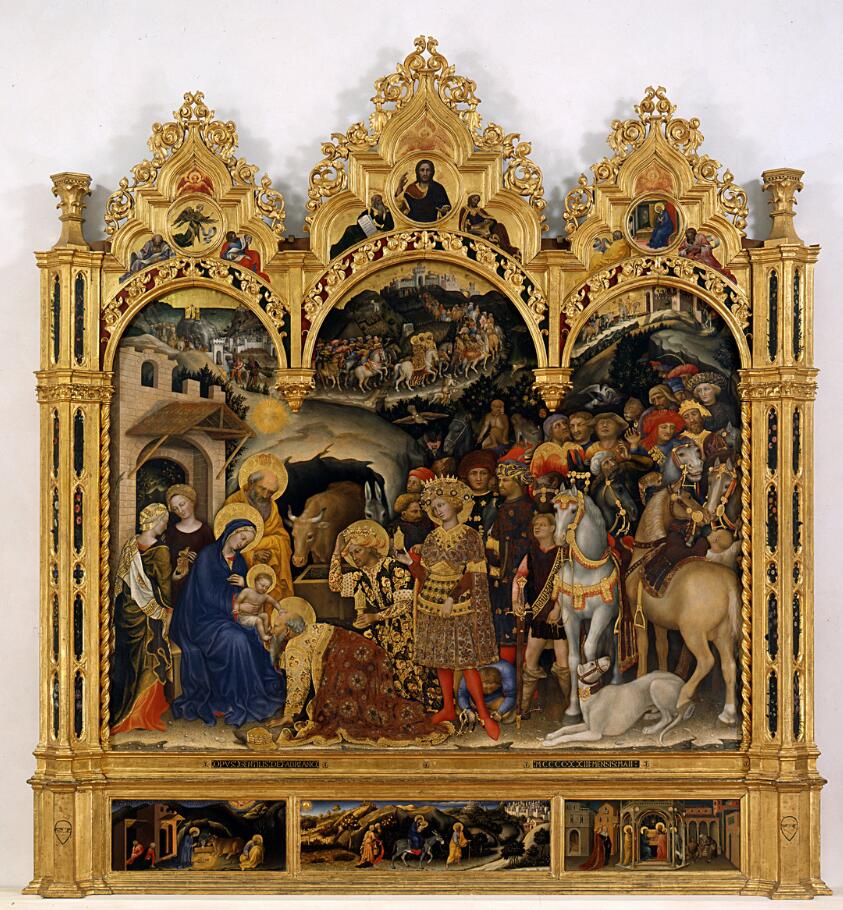 The international style of Italy was first and foremost represented by the Siena school in the early 1300s. Contact with the countries north of the Alps became lively; Simone Martini (1284–1344) worked for a period as Pope’s court painter in Avignon. He gave Giotto the characters some weight, but was closer to Duccio in alignment and color splendor. Ambrogio Lorenzetti (died about 1348) depicted the lush life of the city and the countryside in allegorical frescoes in Siena’s town hall. Both he and his brother Pietro Lorenzetti (1280–1348) continued Giotto’s quest to create a picture space with perspective depth. After the Black Death in 1348, the international style entered its most decorative phase with Lorenzo Monaco (1370-1425) and Gentile da Fabriano (c. 1360-1427) as foreground figures. 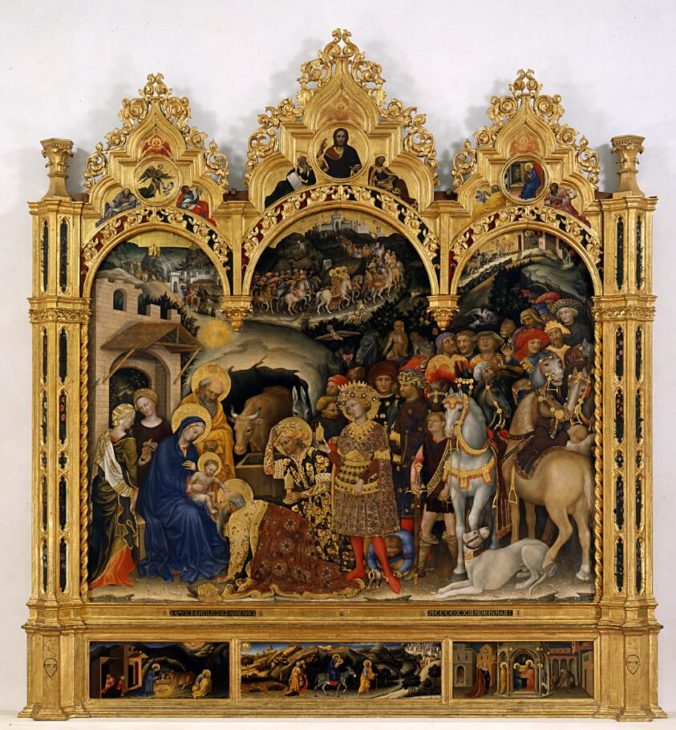 The Renaissance had its breakthrough in Florence and is often dated from the competition in 1401 for the bronze gates of the cathedral baptistery. Lorenzo Ghiberti (1381-1455) won the competition with proposals that were still Gothic in general, but which showed a new realism in the depiction of the naked human body, based on studies of ancient sculpture.

Antiquity and nature became the teachers of the sculptors. Nanni di Banco (1380–1421) and Donatello (1386–1466) went further than Ghiberti in realistic portrayal of the human body. Donatello’s bronze sculpture David (1430) was the first freestanding, naked sculpture since antiquity, and his monument to the patron Gattamelata (1453) in Padova formed a pattern for similar equestrian monuments in the Renaissance and Baroque. 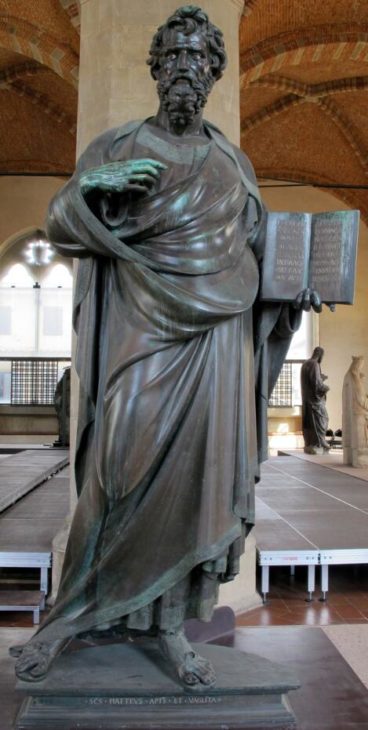 The central perspective was used in relief art and in paintings from around 1450 and clearly marks the new era in art. Donatello’s successors were Andrea del Verrocchio (1435–88) and Antonio Pollaiuolo (1429–98). Ghiberti continued his work with reliefs for the Baptist doors in Florence. His compositions gradually became clearer and more transparent, with a central perspective built architecture. Luca della Robbia (1399–1482) became famous early on for his Madonna sculptures and medallions in blue and white. To Ghiberti’s contemporaries, Jacopo della Quercia is considered(1376–1438), which worked in Siena as well as in Bologna, where the reliefs of San Petronio show scenes from the history of creation. His Adam and Eve are depicted naked, with a plastic force and realism that later aroused Michelangelo’s admiration.

Some years after Donatello’s breakthrough, Masaccio (1401–28) began the frescos in the Brancacci Chapel of Santa Maria del Carmine in Florence, which is considered the breakthrough for the Renaissance in painting. In these frescoes, human beings emerge as individuals. Also included in this breakthrough generation are Andrea del Castagno (1423–57) and Domenico Veneziano (1410–61). Veneziano gave the Florentine painting a new way of depicting landscapes, and Paolo Uccello (1397–1475) painted hunting scenes with advanced perspective use.

After the painting’s breakthrough in Florence, developments continued in other northern Italian cities as well. Piero della Francesca (1416–92) worked at the court in Urbino and Rimini. He was groundbreaking especially through his treatment of the light and his clear plan and his perception of space. Andrea Mantegna (1431-1506) performed frescoes in the Hermitage church in Padova (1449-54) with scenes from Jacob’s martyrdom, presented in sharp sub-perspective. In his cool and clear compositions, the antiquarian elements also make a strong impression.

The more traditional painting lived on in 14th century Florence. Dominican Monk From Angelico (1387-1455) painted religious paintings filled with heartfelt emotion. More robust in manufacturing was From Filippo Lippi (1406–69). His depictions of madonna with children are realistically portrayed. Benozzo Gozzolis (1420–97) frescoes in the chapel of Palazzo Medici depict the members of the Medici family, portrayed as the three holy kings with them, riding through the Tuscan countryside. Gozzoli, Domenico Ghirlandaio (1449–94) and Pinturicchio (1454–1513) also performed wall frescoes in the Sistine Chapel of the Vatican. 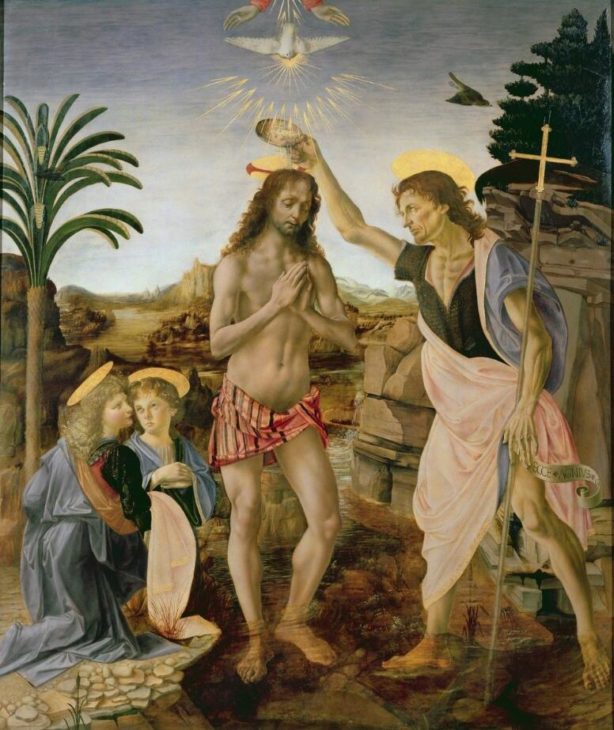 In the 1400s, Venice got two key artists; Gentile Bellini (1429-1507) and Vittore Carpaccio (1455-1526) who portrayed processions and regattas, saints and the like with penetrating realism.

In Florence, the artists received a significant mesen in the Medici prince Lorenzo il Magnifico in the 1470s and 1480s. He surrounded himself with a circle of poets, philosophers and painters, who in allegorical and mythological costume interpreted the New Platonic mindset of the epoch. Sandro Botticelli (1445–1510) was the central artist of the Medici circuit. He portrayed sensual and dreamy female characters in allegorical and mythological images such as the birth of Spring and Venus. Together with Ghirlandaio and Perugino, he also performed wall frescoes in the Sistine Chapel.

Antonello da Messina (c. 1430–79) introduced a Dutch-influenced realism in landscapes and portraits, giving important impetus to the painters in Venice, among others. There Giovanni Bellini (1430-1516) created the Venetian mood painting. The same exalted tranquility is found in Perugino’s (1445-1523) saint images from Umbria. Luca Signorelli (1441-1523) depicted, in the large frescoes of Orvieto’s cathedral, the naked human body in rest and dramatic movement, anticipating the program of the High Renaissance: disciplined composition and vivid movement.

With Leonardo da Vinci (1452-1519) the program of the High Renaissance is completed. His paintings are skillfully composed on the basis of geometric figures and dramatized with contrasting movements. In the Last Supper, the great fresco of Santa Maria delle Grazie in Milan (1498), the twelve disciples are placed in four symmetrical groups around the central Christ figure. His most famous painting is the portrait of Mona Lisa (made in the early 16th century). Other well-known paintings are Madonna in the cave, and the worship of the incomplete Holy Kingdom.Leonardo da Vinci broke new avenues in painting through his color treatment and his perspective. He was the first to realize and purposefully exploit the importance of light and atmosphere to the art of painting.

When, after the schism, Rome again became the recognized capital of the papacy, the artistic leadership came to lie there. Michelangelo Buonarroti (1475–1564) was the central figure of the High Renaissance in Rome. He worked as a sculptor, painter and architect. As a sculptor, he performed a number of central sculptures and tombs; the figure group Pietà (1497–1500) in St. Peter’s Basilica, the colossal statue of David (1501–04) in Florence, Moses and two slaves to Julius 2’s tomb. Only the statues of Lorenzo and Giuliano de ‘Medici and the symbolic figures of the day and night, dusk and dawn, were added to the burial monument of the medics in the New Sacristy of San Lorenzo in Florencefinished. As a painter, Michelangelo created perhaps the most significant frescoes in the roof of the Sistine Chapel (1508-12). On the back wall, in 1541, he completed the famous production of Doomsday.

The third of the Masters of the High Renaissance was Rafael (1483-1520). He painted a number of madonna and saintly pictures early as Madonna del Granduca (Florence). For Pope Julius 2, he performed large murals in a series of rooms (stanzas) in the Vatican; The school in Athens is considered his main work. Of his famous portraits are Donna Velata and Pope Leo 10 and two cardinals. In Villa Farnesina he painted the triumphant mythological composition of Galatea’s triumph. His religious compositions include Madonna della Sedia and Sistine Madonna.

In Venice, the High Renaissance painting is first and foremost a light and mood painting, well prepared by Giovanni Bellini. His pupil Giorgione (c. 1478–1510) painted profane motifs; sensually he has depicted the naked Venus in a paradise landscape, the first in a series of paintings with women’s act as the main motif. Many of his paintings were completed by Tizian (c. 1485–1576), in a style difficult to distinguish from the teacher’s. Tizian’s outstanding portraits are characterized by a penetrating character study, representative mastery and elegance, and came to inspire Baroque painters. Another highlight of his production is the Venus images: Venus from Urbino, Venus and Adonis and more. Among his allegorical works must be mentionedThe heavenly and earthly love of Villa Borghese in Rome. Tizian’s later images are characterized by mannerism and move towards an expressive, picturesque form resolution.

In Parma, Correggio (1489–1534) prepared the Baroque in his vault and dome frescoes. They are characterized by illusionism and perspective shortening, swirling movements and flowing lights.