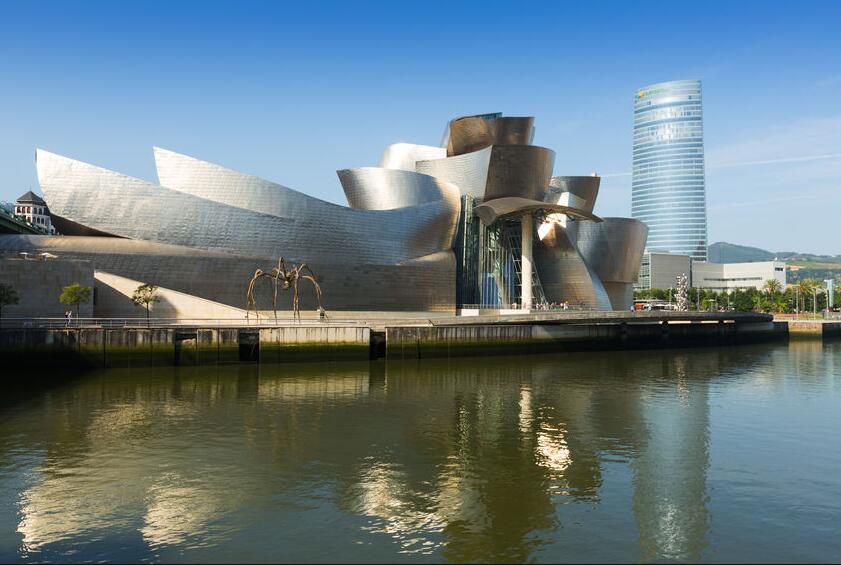 Getting to the various sights in Bilbao is easy. The city is not particularly large, and also has a good underground that takes you quickly. If you do not have a bad time, you should choose to take some of the transport stages with the charming trams. Bilbao is a city located in Spain. Here are some of the sights you should take with you. 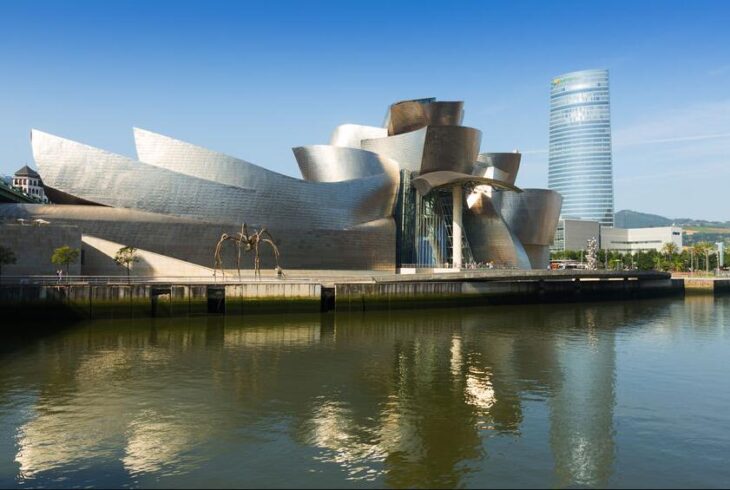 The Guggenheim Museum in Bilbao is becoming one of the most famous buildings in modern history. The museum was designed by Frank Gehry who is also behind a large number of masterpieces around the world. The style is quite distinctive. The building is guarded on the outside by the two sculptures of Jeff Koons (the flower dog) and Louise Bourgeois (the bronze spider). Many people think the building and the surroundings are just as exciting as the exhibitions you can see inside. However, this does not mean that you should drop the entrance fee. The museum has several installations that are permanent fixtures, as well as a small number of permanent exhibitions. Other exhibitions change relatively often, and as a rule it is art on specific topics that is displayed. The Guggenheim Museum is considered an important factor in the boom Bilbao has enjoyed over the past 20 years. 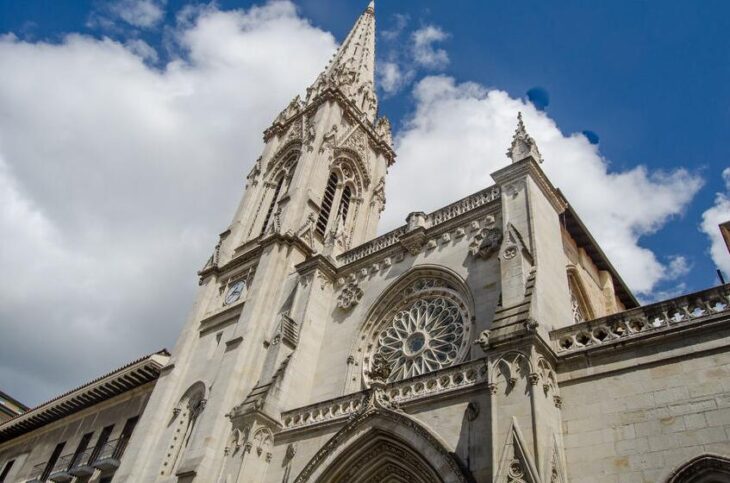 The cathedral is located in Casco Viejo, Bilbao’s picturesque old town. The site the cathedral stands on was originally a shrine from the 14th century, while the present building was erected in the 19th century. This is one of the stops of the famous pilgrimage that ends in Santiago de Compostela. The building style is Gothic, and the Catedral de Santiago is considered very majestic and beautiful. You can visit it on your own every day of the week, or hop on one of the guided tours that also show off the rest of the old town and the historic buildings there. 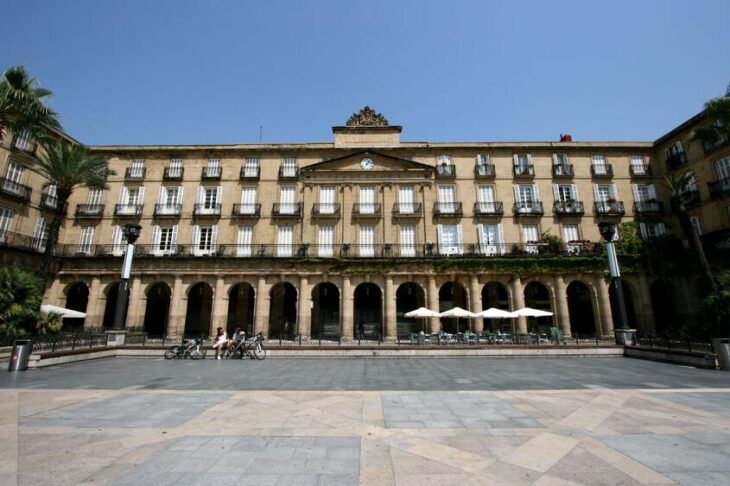 The square was completed in 1851 and is surrounded by neoclassical buildings (the square is also called Plaza Barria). The main building that encloses the square was the former government building for Biscay, but today houses the Basque Language Academy. The place is great to settle down when you need to rest your feet, or get hungry. Along the buildings there are many good cafes, bars and restaurants, as well as marketplaces that sell all sorts of strange things. Concerts, plays and festivals are often held here, as well as a weekly flea market. Plaza Nueva is also one of several places where Bilbao offers free WiFi to all who visit. 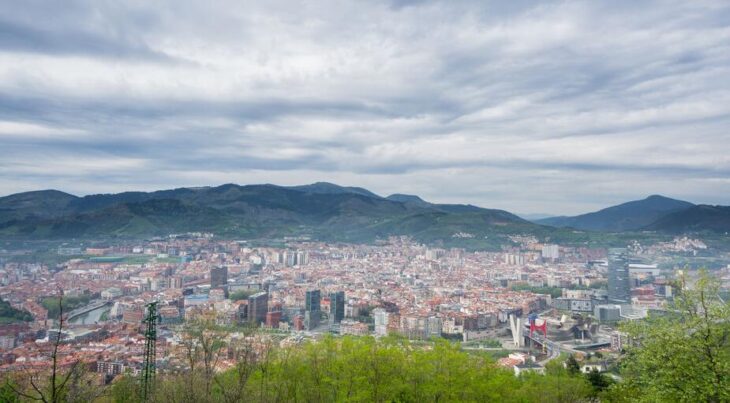 Take the cable car up to the top of Artxanda and see Bilbao in bird’s eye view. The cable car is only called “Funi” by the locals and is over 100 years old. The trip up goes through the Arangoiti district and takes no more than 3 minutes to the top. From there you also walk many paths in nice surroundings if you need a walk. The cable car is in daily operation and runs every 15 minutes from Plaza del Funicular, just a short walk from Bilbao City Hall. 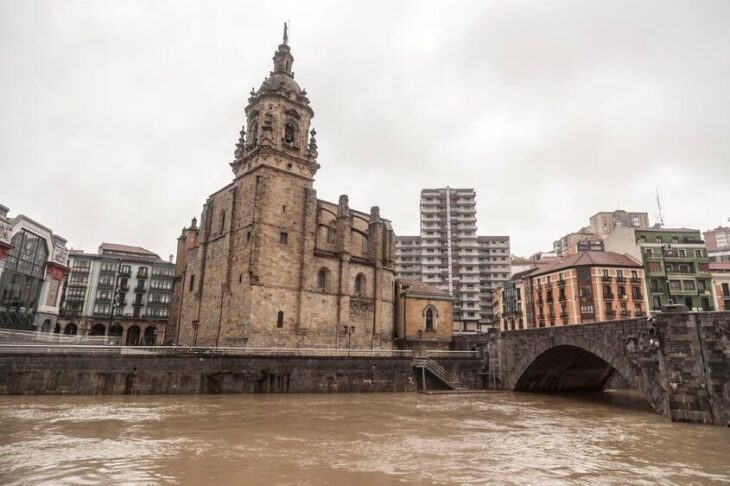 Bilbao’s Old Town is located along the riverbank and stretches between the San Antón Bridge and the Church of San Nicholás. Five bridges connect the new part of Bilbao, Ensanche, and the old town. The heart of Casco Viejo is Sieto Calles, the Seven Streets, Barencalle, Barrencalle Barena, Somera, Artecalle, Tenderia, Belosticalle and Carniceria Vieja. The old town is the most exciting and colorful part of Bilbao. The intimate streets are perfect for strolling aimlessly while enjoying the impressions, peeking into the shops, visiting the markets, and perhaps sitting down in a pleasant café. There are several buildings to see in the old town as well, including San Nicholas Cathedral, San Antón Church, Santos Luanes Church and the Arriaga Theater. In Bilbao, by the way, it is a tradition among well-adult men to go from pub to pub in Casco Viejo, while drinking chiquitos (shots) and singing songs. 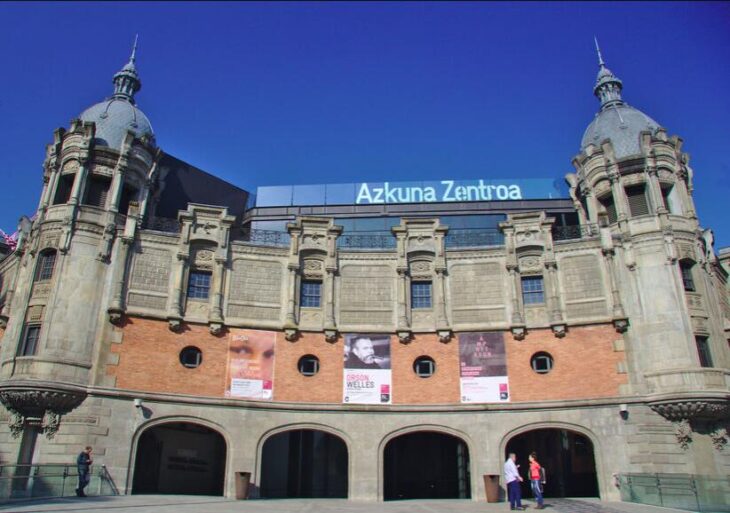 Take a trip to the Azkuna Zentroa cultural and leisure center. There you will find many exciting exhibitions, state-of-the-art fitness center and swimming pool, a top cinema complex with 7 halls, shops, media center and media library, cool cafes and good restaurants. The swimming pool also has a great view in all directions, including down through the glass bottom. All surrounded by impressive architecture that makes the building one of the many gems of Bilbao. It is best to get to the top of the building. On the roof there is a good bar to sit down on, as well as an area of ​​2,000 square meters for sunbathing for relaxation. 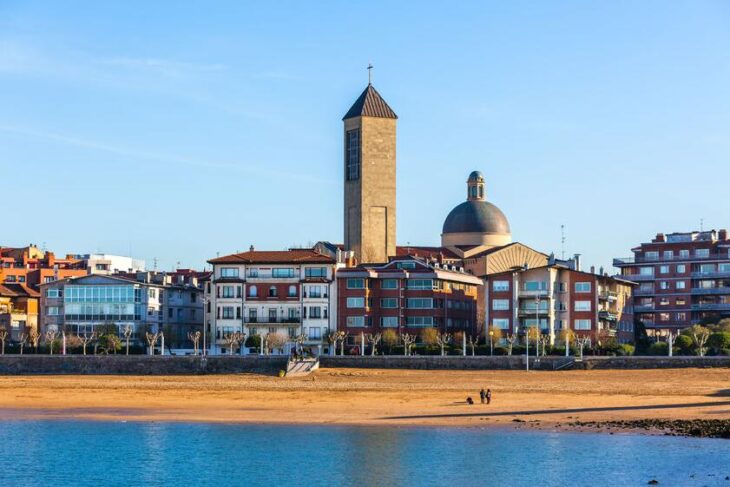 This district is located on the north side of the estuary and is known as the place to eat seafood. The metro takes about 20 minutes from Bilbao city center (get off at Algorta). In Getxo there are 4 beaches that the inhabitants enjoy on hot summer days, many good fish restaurants, fish market, golf course and beautiful villas along the promenades. Concerts and festivals are often arranged here that are worth attending.

The Maritime Museum in Bilbao is one of the most popular attractions in the city, especially for families on a city break. Here you get an insight into how important the sea and shipping have been for the Basques. The museum is relatively new and is considered an architectural sight in itself. It is built on the same site where the shipyard Euskalduna was from 1900 until 1984. Of this, for example, the dry docks have been taken care of and are part of the museum. The Museo Maritimo Ria is open every day of the week except Monday. If you drop by on Tuesdays outside the summer season, admission is free. 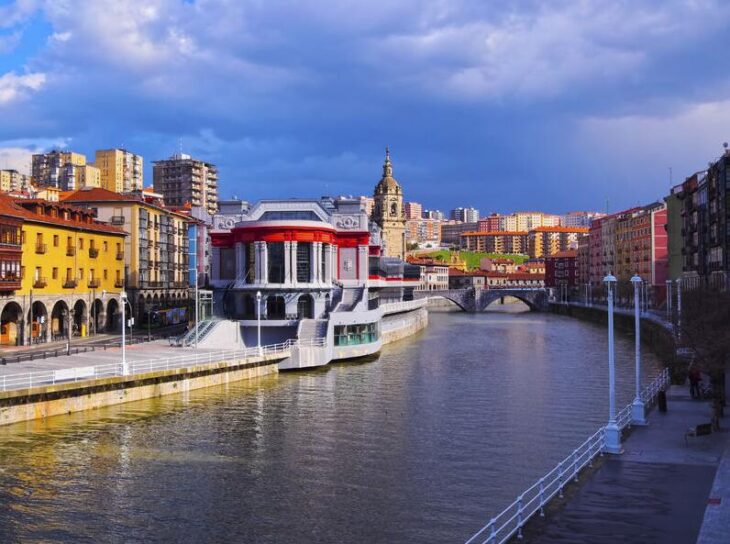 Located in the old town (Casco Viejo), the Mercado de la Ribera is the largest indoor market in Europe. The area is over 10,000 square meters, with about 400 different stalls. On the ground floor, seafood and meat are sold from local fishermen and producers, while the second floor is dominated by greengrocers. In recent years, there have been many stalls selling local delicacies, several wine bars, and also stalls that serve as small eateries. The market also has a beautiful terrace with dining.