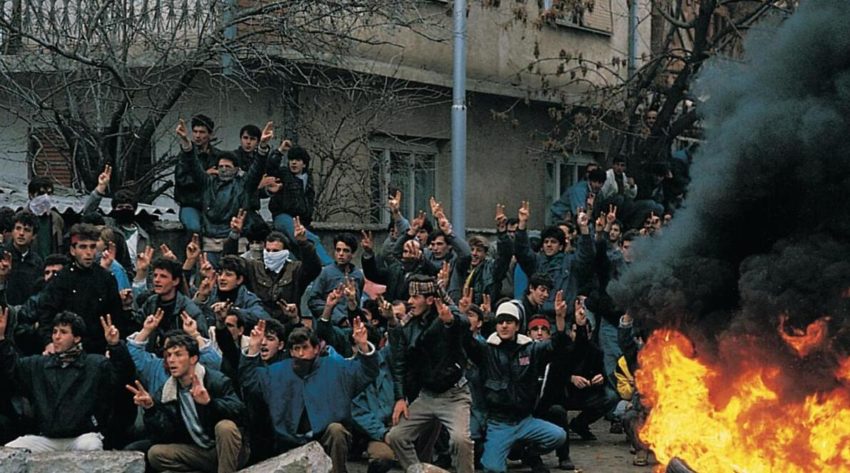 Kosovo’s location on a fertile highland plain in the middle of the Balkan Peninsula has since antiquity made it a contentious border area, at the intersection of competing realms and modern nation states. Throughout history, the area of ​​Kosovo has had floating borders and been part of various empires and state formations, first under Roman and then Byzantine rule, and later as an important center in the Serbian medieval empire. This has given Kosovo the nickname “Cradle of Serbia”. 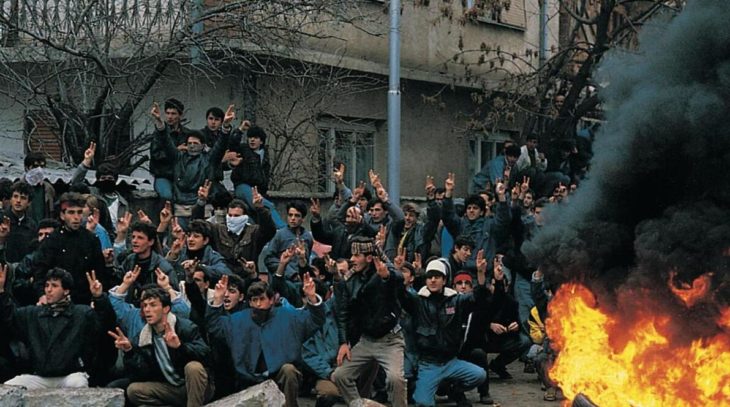 Albanian nationalists in Kosovo in 1990. In parallel with the economic crisis of the 1980s, nationalism grew in several parts of the very disparate Yugoslavia. In 1990, Serbia’s President Milošević abolished Kosovo (and Vojvodina) autonomy, which led to major unrest in Kosovo. The uprising was fought militarily, and in Serbia the demand for the Serbian minority in Kosovo increased and Kosovo was deprived of its autonomy. Serbian intellectuals supported a “memorandum” in 1986, which demanded action against Kosovo Albanians and greater influence for Serbia.

In 1968, the name was changed to the Socialist Autonomous Province of Kosovo, which in 1974 gained increased autonomy in Serbia. In 1981, Albanian protesters demanded independence. The relationship between Serbs and Albanians continued to deteriorate, which was reinforced by the new Serbian leader Slobodan Milošević towards the end of the 1980s. In 1989, Serbia restricted Kosovo’s autonomy and initiated an anti-Albanian policy.

In 1990, the Kosovo Parliament declared the area a republic in Yugoslavia. In 1991, they declared themselves an independent state, the Republic of Kosovo, but remained under Yugoslav rule. From 1996, the conflict between the Albanian guerrilla UÇK and Yugoslav government forces intensified, and it developed into full war from 1998 to 1999, with massacres and ethnic cleansing. On March 24, 1999, NATO launched bombing campaigns against Yugoslavia to stop the attacks on the Albanian civilian population.

On June 10, 1999, the war ended and Kosovo came under UN rule. This did not prevent more serious incidents of violence, such as attacks on Serbs and rooms. In 2007, the UN plan for Kosovo’s future independence was published, but rejected by Serbia. In 2008, the EU (EULEX) gradually began to take control of the UN (UNMIK). On 17 February 2008, Parliament declared Kosovo’s independence, which was quickly recognized by most NATO and EU countries.

Kosovo’s political status is still contested, with many unresolved issues between Kosovo and Serbia. Relations between Albanians and Serbs are still inflamed.