There is a mandatory nine-year school from seven years and three-year upper secondary and vocational schools. Latvia has 33 university institutions, six of which are universities. Higher education is not free, but the state finances free places on some priority study programs.

The country has one of the world’s largest collections of poetry. Especially for Latvia are the folk songs, dainas. The folk singing tradition plays an important role, among other things, at the Ionsok celebration (Jāņi), which is one of the most important feast days of the year. The chant tradition is strong in Latvia and since 1873 national song festivals have been organized. A major song and dance festival is organized every five years and this is on UNESCO’s list of the world’s non-material cultural heritage.

The first literature in Latvian was written by German writers, but in the second half of the 19th century a national literature developed. In Latvian literature, lyric is particularly strong. During the Soviet era, there was a parallel cultural life and organizations in Latvia and with exilatians (especially in the United States, the United Kingdom and Sweden).

Since the 18th century, there has also been a separate writing language tradition (Latvian) based on the dialects spoken in Latgale. The biggest newspapers are Diena, Neatkarīgā Rīta Avīze and Latvijas Avīze. There have been regular radio broadcasts since 1925, and today there are nine nationwide radio stations. Latvia was the first country in the Baltic with television broadcasts (from 1954, color television from 1974). There is good internet coverage. 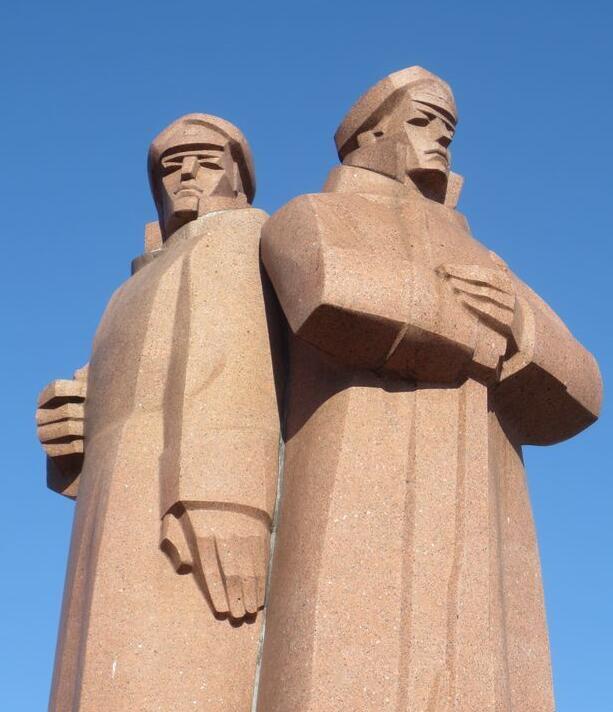 Latvia’s Red Shooters were a division of the Russian Empire during World War I. Their job was to protect Baltic territory from German conquest. This memorial to the shooters was erected by the Soviet Union in Riga.

Archaeological finds (whistles and rattles) from the Stone Age are the oldest documentation of music in Latvia. At the end of the first millennium after Christ, various musical instruments were used, including whistles with five finger holes and a citation type. The music life of the Middle Ages was characterized by Catholic church singing and worldly instrumental music. Impulses from the Hanseatic League form the background to the fact that in Riga already from the 1300s there were city musicians responsible for instrumental music in secular contexts both in the public and private spheres. With the Reformation, the church song was sung in the native language, and the first liturgical song collections in Latvian were published in 1587 and 1615. Contact with Western European music led to the establishment of musical companies and musical theaters in the 18th century.

A national school became the tone of the mid-1800s with composer Karlis Baumanis and folk tone collector Janis Cimze. Choral singing became a particularly important genre, and major national choir festivals were organized from 1873. Many composers were inspired by folk music. In the short period of independence (1918–40) the music life flourished, with the establishment of national opera, conservatory, music schools, permanent symphony orchestra and chamber music groups. During the Soviet period, some composers left the country and continued their work in the West.

Folk music has deep historical roots, but the collection of this tradition began only in the 19th century. The folk song includes many forms, most of which are sung by women and are related to rituals, seasons and daily life. Furthermore, it is sung to dance. Folk instruments include kettle (seats, related to Finnish kettle), riddle, stabule (recorder type), ganurags (herd horn), taure (curved neverlur), dudas (bagpipe) and trideksnis (metal rattle).