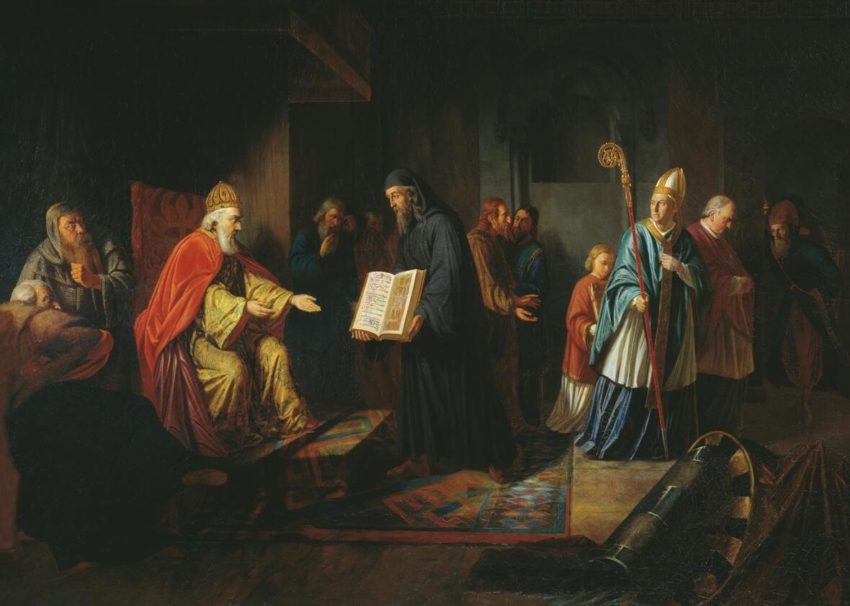 Latvia has an exceptionally rich folk poem, especially represented by folk songs (dainas). These are characterized by a strict moral but optimistic view of life, where the road to a good life goes through diligent work. Folk songs have been an important source of inspiration for much of Latvian literature. Approximately approx. 1.6 million of them (including variants), and the pioneer in the collection work was Krišjānis Barons (1835–1923). The oldest printed literary works in Latvian are from the 16th century and are of a religious nature. The first complete Bible translation was published in Riga 1685–91.

Vladimir the Great entered into a covenant with the Byzantine emperor in 988, married his sister Anna and introduced Christianity to the Kiev kingdom.

A national fiction emerged in the mid-1800s, in line with the romantic trends elsewhere in Europe. The foremost national romanticists were the lyricists Juris Alunāns (1832–64) and Auseklis (pseudonym of Mikelis Krogzemis). Since then a realistic prose has also developed, and the first Latvian novel, The Surveyor Age (1879) by the brothers Reinis and Matīss Kaudzīte, became very popular. In the 1880s and 1890s, realism reached a peak with Rūdolfs Blaumanis ‘short stories and plays, while Andrejs Pumpurs’ epic Lāčplēsis (Bjørnedreperen, 1888) continued the national romantic direction.

At the end of the 19th century, the politically radical “new direction” emerged, led by Rainis (1865–1929). His philosophical lyricism and drama make him Latvia’s most important writer. His wife Aspazija was also a fine lyricist and playwright. Under the impression of the failed revolution in 1905, much of Latvian lyricism was introverted and romantic, represented by names such as Jānis Jaunsudrabinš and Fricis Bārda. Kārlis Skalbe wrote lyric and adventure.

The first period of independence

The literature of the inter-war independent Latvia was diverse. New, expressionist currents were conveyed by lyricists such as Aleksandrs Čaks (1901–50) and Jānis Sudrabkalns. The new generation also included prose writers such as Mirdza Bendrupe, Erik Ādamsons and Anšlavs Eglītis. A more traditional, poetic realism was expressed by Edvarts Virza in his poem Straumēni (1933). It also developed a strong social-critical realism, represented by the Marxist proseist Andrejs Upīts (1877-1970).

Kārlis Ulmanis’ authoritarian regime, established by the coup d’etat in 1934, only slightly hampered literary expression. Nevertheless, several communist writers sought refuge in the Soviet Union, where many of them, including the proseist and lyricist Linards Laicēns, were imprisoned and executed during the great rains of the 1930s. In Latvia, there was some pressure on the authors to praise Ulmanis and his board, but at the same time excellent literature was written. Historical motifs inspired Čaks’ poem The Mark of Eternity (1937–39) and Aleksandrs Grīns ’novel The Snowstorm of Souls (1933–34). Among the lyricists were young talents such as Veronika Strēlerte and Andrejs Eglītis, who both fled to the West in 1945.

With the Soviet occupation in 1940, Latvian literature was guided into the tracks of socialist realism, and by the end of the Second World War many writers chose to flee to western countries. There they were influenced by Western literary currents, but the separation from the fatherland and the difficult exile existence characterize much of the emigrant literature. Significant figures among the exile writers are the proseists Anšlavs Eglītis (USA), Guntis Zarinš (United Kingdom) and Andrejs Irbe (Sweden), lyricists Velta Snikere (United Kingdom) and Juris Kronbergs (Sweden), and playwright Mārtīnš Zīverts (Sweden). In the home country, little of the emigrant literature was known before it was published there in the late 1980s.

In the Soviet Republic of Latvia, Andrej Upīts and Vilis Lācis (1904–66) became the big names, both advocates of an ideologised socialist realism. It was not until the 1960s that new voices came to the fore, led by the woodcutter Vizma Belševica (b. 1931), Ojārs Vācietis (1933–83) and Imants Ziedonis (b. 1933). Their lyrics often contain covert regime criticism, but are also artistically advanced. Knuts Skujenieks, Jānis Peters and Māris Čaklais followed in their footsteps and helped to keep the lyrics focused throughout the Soviet period. Also in the prose there was a renewal through younger writers such as Ilze Indrāne, Regīna Ezera and Albert Bels. When the Soviet regime slackened the reins of literature in the late 1980s, much was published in the West or previously unpublished for fear of the government’s reaction.

The time after the country regained its independence

1991 was initially marked by a striking silence, especially on the part of the prosaists, while the publication of previously censored literature written in the West continued. Precisely precisely the prose underwent a revitalization later in the 1990s, partly through new works by writers who had been active for a while, such as Gundega Repše, and partly by the emergence of new talents, such as Jānis Einfelds, Nora Ikstena and Pauls Bankovskis. Their barrier-breaking and experimental works helped to give Latvian prose a diverse feel. Noteworthy is also Vizma Belševica’s partly autobiographical trilogy about the girl Bille (1992–99).