Maltese cultural life has historically been strongly influenced by both English and Italian influences. A literature in Maltese can be said to have been initially initiated by the poet Dun Karm (pseudonym of Carmelo Psaila, 1871–1961). Karm has been followed by Mario Azzopardi (1928–2006) and a dynamic generation of playwrights and theater people, in many cases linked to the famous Manoel theater in Valletta. 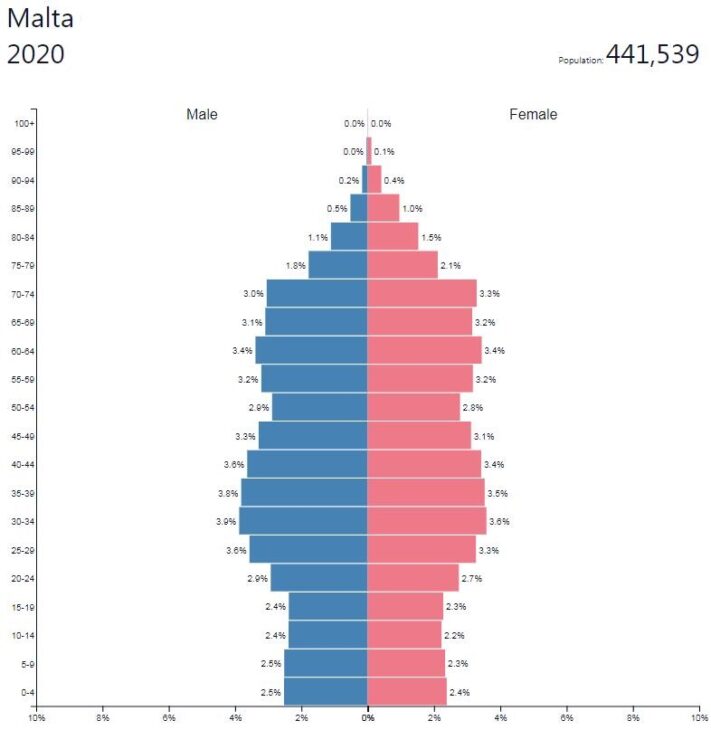 Art music is closely related to Italy, where most composers and musicians received their education. Composers include Giuseppe Balzano (1616–1700), Mikelangelo Vella (1715–92), and his students Francesco Azopardi (1748–1809) and Niccolò Isouard (1775–1818), who composed 30 French-style operas for the Théâtre de l’Opéra-Comique in Paris. During the 19th century the music life was dominated by the Nani and Bugeja families.

Among contemporary composers are Carmelo Pace (1906–93), who wrote operas, cantatas and a well-known symphonic poem with motifs from folk music, as well as his student Charles Camilleri (1931–2009) with a large number of works for orchestra, chamber music and works for piano and other instruments. In younger generations, Joseph Vella (born 1942) and Dion Buhagiar (born 1944) are noticeable.

The Church in Malta has been the center of both sacred and worldly music. Manoel Teatru, inaugurated in 1732, plays opera, musicals and operettas. An opera house in Valetta was opened in the 1860’s, but was destroyed in 1944. In 1890 a higher music education was opened. Today there are several opera houses and symphonic orchestras with internationally renowned artists.

Folk music has grown up in interaction between southern European and North African / Arab traditions. A significant part is songs (gana), which have traditionally been performed unanimously, soloist or antiphonally, by men at bars after the Sunday Mass and by women in the homes. A popular genre is Spirtu Pront, a playful competition between singers (għannej) who improvises on a given theme four-line, linguistically complicated, rhythmically rhymed verses into strong formulaic guitar accompaniment.

Bagpipes (żaqq), friction drum (rabbaba) and tambourine (tanbur) were formerly common, but today they have been replaced by guitar ensembles, sometimes with mandolins, tambourines and accordions, as well as by the very popular brass orchestras introduced from Italy in the mid-1800’s.. With a repertoire of popular songs and works by Maltese composers, these have a prominent role in the major processions of saintly images that are the highlight of celebrations of holidays (festivals), carnivals, Christmas and Easter.

After independence in 1964, older folk music regained popularity, and yet another revival wave began at the turn of the millennium. through the Ethnica group.

Most folk dances are contra dances (il-Kuntradanza), following role models from the 18th century high -level dances. The folk dances have also been partially revived, the usual ones being il-parata (sword dance) and il-maltija, a performance dance that reflects the Maltese resistance to the siege of an Ottoman here in 1565.

During the second half of the 20th century a lively popular music scene emerged, with a large number of artists, groups and composers in indigenous genres such as kanzunetta (popular songs) and makkjetta (comic sketches), rock, pop, hip hop and more.

A major jazz festival is held annually in Valetta.

Malta’s cultural culture is similar to that of buildings and utensils in much of southern Italy, but not least in the construction art, Arabic elements (such as the flat roofs) are traced. A memory of the uncertainty that existed before and during the time of the Order Knights is the characteristic concentration of the older rural buildings in urban-like villages, among other things. for reasons of defense, but also for climatic reasons and given the water supply, which has always been a significant problem for the islands – hence their aqueducts, terraces and water reservoirs. They also avoided living too close to the sea and its pirates. News that was introduced by the Maltese Knights and also spread outside the cities was e.g. the typical balconies and stair towers upstairs for the Maltese houses.

The land is disproportionately fragmented, and many users are tenants under the church, whose significance is striking in everyday life and in the landscape, but especially marked in connection with the celebrations, celebrating the village’s or city’s patron saints and becoming tourist attractions. The culmination of a party is the procession where the image of the saint is carried through the streets. In addition to around eighty such local festivals, a number of public holidays are also celebrated with processions, to which comes the carnival, which is now held first in May and for up to four days. The craft – silversmithing with filigree work as well as textiles, both woven and knitted, lace and embroidery – has old traditions but today mainly has the tourists as customers. The old-fashioned women’s clothing felletta disappeared after World War II, and the “folk costumes” shown by folk dance groups are often invented. Folk poetry, which is still alive, not least in the form of traditional songs, is, for the sake of the stories, closely related to Sicily but also to Greece, which suggests old cultural contexts.