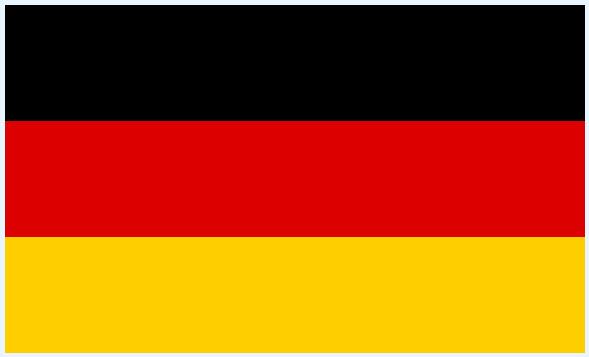 German daily press is one of the oldest in the world. There are a large number of newspapers and television companies, but most of the press is regional. Television is also largely run at the state level. The country has extensive freedom of the press, but reproductions of hook crosses and statements supporting Nazism are prohibited by law.

The beginning of German press history was the leaflets; the first newspaper, Leipziger Zeitung, came in 1660. Throughout the 18th and 19th centuries, the press grew slowly, until about 1800 only as official message and advertisement magazines. The press was then of little news and political significance, and subject to censorship. From this period come the Hamburgischer Correspondent (1714), the Berlin newspaper Vossische Zeitung (name 1751, first as subtitle) and the Augsburgische Allgemeine Zeitung (1798). The freedom struggles after 1800 gave rise to lively journalism; in 1814 Rheinischer Merkur was founded in Koblenz, 1837 Deutsche Allgemeine Zeitung in Leipzig, and in the revolution year 1848 Munich neueste Nachrichten. But the authorities still suppressed political opinions, and the Bismarck era was characterized by severe censorship; the newspapers contained little political substance. Two public press offices delivered most of the “opinion” material to hundreds of local small newspapers. In 1872, R. Mosse founded Berlin Tageblatt, which under Theodor Wolff’s editorial (1906–33) became one of Europe’s most influential newspapers.

With the advent of socialism and the intensified political struggle, the press became more differentiated. Some newspapers from the years before the First World War played a major role in the history of the free-spirited and independent press. Frankfurter Zeitung, Berlin Tageblatt, Hamburger Fremdenblatt, Deutsche Allgemeine Zeitung and Kölnische Zeitung. In the interwar period, many reputed newspapers came under the influence of financial circles and far-reaching political parties. Important newspapers were Berliner Börsenzeitung (body of the German-national), Vossische Zeitung (liberal), Berliner Morgenpost (leftist), Vorwärts (socialist) and Rote Fahne (communist). Deutsche Allgemeine Zeitung was then controlled by the government.

With Hitler’s takeover of power in 1933, all freedom of the press disappeared. A number of well-known newspapers went in or stopped, some continued as spokesmen for the regime. The main body of the National Socialist Party since 1920 was Völkischer Beobachter, which appeared in Munich and Berlin, from 1938 also in Vienna. Wolff’s news agency was replaced in 1934 by Deutsches Nachrichtenbüro. During World War II, many newspapers eventually went in; the remaining disappeared at the collapse of 1945.

In the years 1945–49 newspapers could only be published with a license from the occupying powers, but already during this period several newspapers were started which were widely used. The regional press has always been strong in Germany. The interregional newspapers from the interwar period did not resurface, but in West Germany some newly started newspapers, such as the Frankfurter Allgemeine Zeitung (founded in 1949, ed. 2005: about 370,000), Die Welt (founded in 1949: about 217,000) in Hamburg, now also published in Berlin, and the Süddeutsche Zeitung (founded in 1945: about 430,000) in Munich, quality newspapers read outside their geographical area. The development in the West German press was moving towards an ever stronger concentration. The leader of this development was the German press baron Axels Springer. In 1968, a state commission adopted rules governing how much of the market a single publisher group was allowed to control. At that time, the Springer Group owned 39% of the daily newspapers and 17.5% of the weekly magazines.

In East Germany, the press was controlled by the communist authorities and politically unified. The dominant newspaper was Neues Deutschland, Berlin, the main body of the Socialist Unity Party (Communist Party). The newspaper is now published as a “socialist daily newspaper”, closely related to the party PDS (circulation 2004: about 52,000). One of the most successful East German newspapers is Berliner Zeitung, which in 1990 was taken over by Western interests and completely reshaped. It now has a circulation of just over 190,000.

ARD (Arbeitsgemeinschaft der öffentlich-Rechlichen Rundfunkanstalten der Bundesrepublik Deutschland), established in 1950, is a coordinating organization for broadcasting companies in the states. Each state company broadcasts 3 to 5 radio programs. Radio programs are widely exchanged between the state companies. Alongside this, several regional commercial radio stations are operated. During the Cold War, the Americans established Radio Free Europe / Radio Liberty and broadcast broadcasts from Voice of America to Eastern Europe and the Soviet Union via broadcasters in West Germany.

Prior to the German reunification, the radio and television operations in East Germany were coordinated and monitored by state broadcasting committees. The GDR’s broadcasting business was unidirectional and propaganda-dominated. About. However, 80 percent of the population lived in areas that included West German television, and not least the news broadcasts from the West were popular, as the information value of the communist authorities’ news broadcasts was often small.

In Germany, there are now two public (public service) television channels. ARD organizes a national television channel with contributions from the regional companies, as well as a regional channel in each state. In addition, broadcasts from the public organization ZDF (Zweites Deutsches Fernsehen). Both ARD and ZDF also broadcast their own satellite programs. With the rise of satellite television in the 1980’s, Germany became a major market for emerging international commercial television companies. About. 90% of German households have cable or satellite TV, and most have access to around 30 free or commercial channels free of charge, making pay-TV less widespread than many other places. RTL is one of the largest commercial players, which ships from Luxembourg. This company is owned by the media group Bertelsmann. Germany’s other major media group is Axel Springer AG. In addition to newspapers and publishers, it owns approx. a quarter of the TV company ProSiebenSat.1 Media AG, where an investor group led by US billionaire Haim Saban owns 75%. A former media company, Kirch Media, which owned 40% of the Springer Group, invested in satellite TV, film rights and pay-TV; it collapsed in 2002, and was purchased by Haim Saban’s group and parts of it are now included in ProSiebenSat.1

Germany has come a long way in terms of work for the transition to digital broadcasting, both radio and TV. The public broadcasting companies ZDF and ARD already have a number of digital channels.