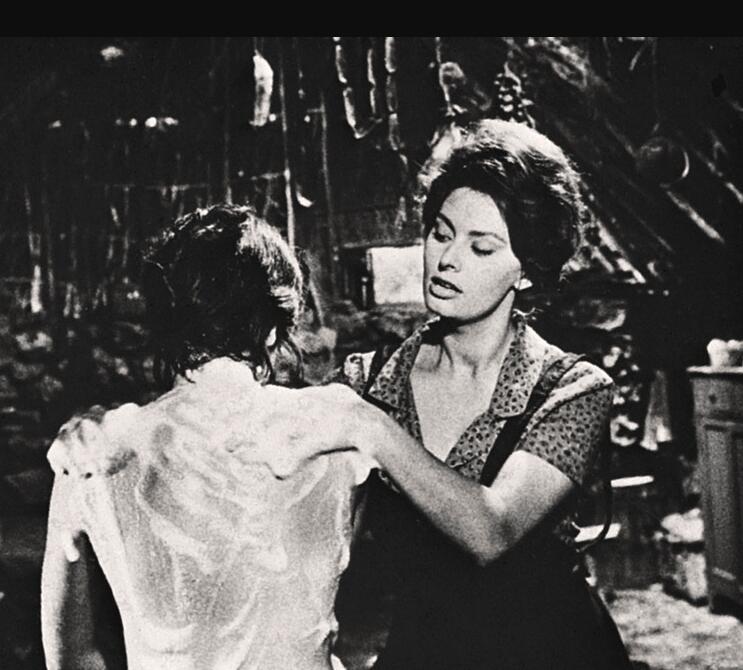 Italy is considered one of the film’s great nations and can look back on one of the richest film traditions in the world.

An important pioneer was Filoteo Alberini, who already in the fall of 1895 patented a camera he called the Kinetographer. However, it was the representatives of the French brothers Lumière who did most of the filming and provided most of the screenings in the first period. The first Italian-produced topical film was made in 1904 in Turin by Roberto Omegna and Arturo Ambrosio. The same year Italy’s first cinema opened in Rome. Production accelerated from 1905. This year Alberini, in collaboration with Dante Santoni, built a studio in Rome and made Italy’s first real fiction film, La Presa di Roma. The film was a historical drama, the first within a genre that would become the major specialty of Italian film over the next few years. A number of manufacturers established themselves in Rome, Turin, Milan and Naples until the end of the first decade of the century. Alberini and Santoni’s company joined Cines in 1906, a company that would retain its importance until the 1930s, leading with titles such as Otello (1907), Garibaldi (1907) and Jeanne d’Arc (1907), all in directed by Mario Caserini. Here also became Enrico Guazzoni’s lavish Quo Vadis? (1912) produced. Ambrosio in Turin made 1908 the first of many versions of Gli ultimi giorni di Pompei, about Pompei’s downfall, but soon got a competitor in Giovanni Pastrones company Itala-Film. With Pastron’s giant production Cabiria (1914), both the historical genre that now celebrated successes worldwide and which, with its many technical and aesthetic innovations, had become of great importance for the development of film art, culminated in the pioneering era of Italian film. Of significance in this era is also a realistic trend, best represented by Sperduto nel buio (1913) under the direction of Nino Martoglio. 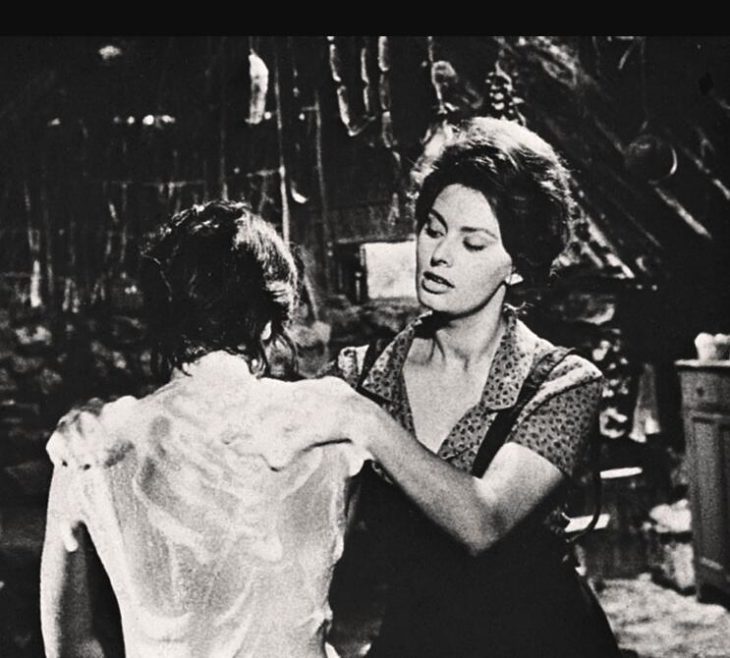 Scene from Vittorio de Sica’s Two Women 1961, a movie after Alberto Moravia’s novel. For her play in this film, Sophia Loren received Italy’s “Silver Band”, since then she was also voted best female actress in Cannes for this role.

After the First World War, competition from American film became noticeable, and Italian film lost the battle both at home and abroad. Production declined in the 1920s to a dozen films annually, and Italian film accounted for only 2% of the cinema’s repertoire. The fascist authorities took certain measures to improve the situation, i.a. a requirement that at least one Italian film be shown for every tenth foreign. Bright spots include Mario Camerini’s Kiffi Tebbi (1927) and Alessandro Blasetti’s Sole (1929). 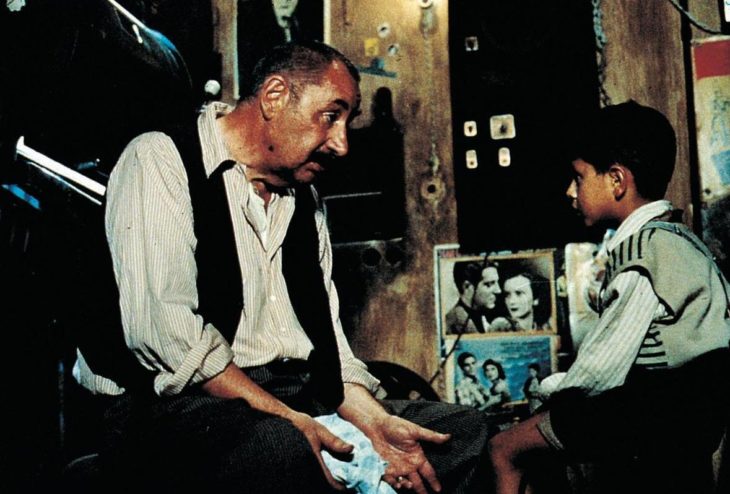 Scene from Giuseppe Tornatore’s nostalgic movie about cinema, Cinema Paradiso (1989). To the left Philippe Noiret in the role of cinematographer.

The first Italian sound film was La Canzone dell’amore (1930) directed by Gennaro Righelli. He also made the first sound film with clearly fascist content, L’Armata azzurra (1932), which was a tribute to Mussolini’s air force. A number of such productions gradually came to light, but the 1930s are best remembered for the many sentimental and romantic melodramas; the epoch has become known as telephony bianchi (‘white phones’), as the action often took place in glamorous surroundings with similarly elegant scenography. In the mid-1930s, an upheaval came when the Mussolini dictatorship began to pursue an active film policy. In 1935, the film industry became subject to a newly created body in the Ministry of Culture, Direzione Generale per la Cinematografica, which supported the film industry with subsidies. In the same year, the state film school Centro Sperimentale was established in Rome, and in 1937 the large and contemporary studios in Cinecittà outside Rome were opened. The fascists banned the viewing of foreign films in the original language and applied the “dubbing” principle for censorship purposes. Production increased to approx. 100 films per year. The new schemes favored the most Mussolini loyal, including got the dictator’s son Vittorio to establish the major production and distribution company Europe. 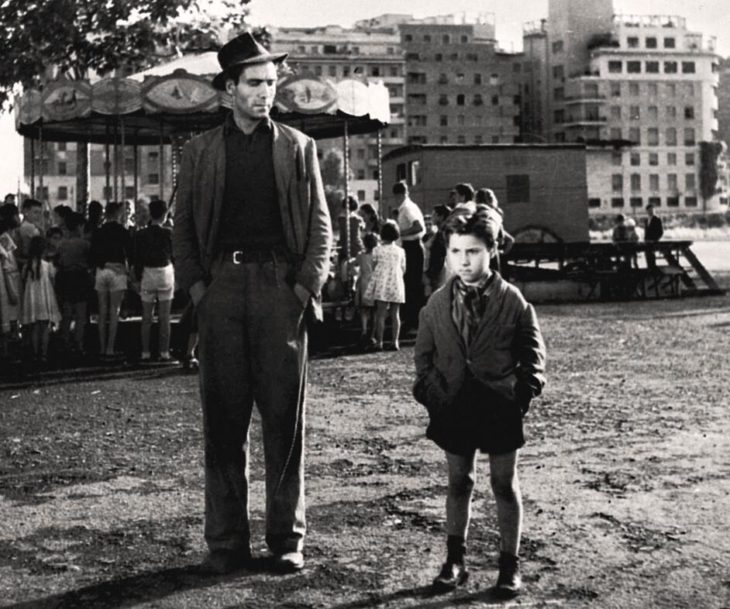 The Bicycle Thieves is a 1948 Italian feature film directed by Vittorio De Sica. With its widespread use of real environments and amateurs in the roles, the film is regarded as a key piece of neorealism.

Towards the end of the fascist era, a new generation of film directors made their appearance, a generation that perhaps more than anyone else has made its mark on film history. Turning points were Luchino Visconti’s debut film, the crime drama Ossessione (1942) which relocated the action of American author James M. Cain’s novel The Postman Always Rings Twice to the Italian highway, and Roberto Rossellini’s Roma – città aperta (1945), recorded in recent weeks of the German occupation. Both films, despite their dramatic course of action, had a close relationship with reality and everyday life, in stark contrast to most of the fascist epoch’s films. After the war, Rossellini followed up with Paisà (1946) and ViscontiLa terra trema (Earth shakes, 1948), the latter a film about Sicilian fishermen with amateurs in the roles. Common to these filmmakers was a poetic realism that they now used to work on post-war reality. The style was called neorealism (‘neo-realism’), a word first used on Visconti’s debut film (citing the silent film’s first trend of realism). Neorealism definitely brought Italy’s cinematic art back to the world stage; the most important front figure was the former actor Vittorio De Sica with his everyday portrayals Sciuscià ( Skopusserne, 1946) and Ladri di biciclette (The Bicycle Thieves, 1948), and the entertaining fable Miracolo a Milano (The Miracle of Milan, 1950), with a sting against the economic elite. Among the others are names such as Alberto Lattuada with Senza Pietà (1948), Pietro Germi with In nome della Legge (In the name of the law, 1949), and Giuseppe De Santis with Riso amaro (Bitter rice, 1949).

In the 1950s, neorealism lost its vitality, but the rate of production was still high, and by the original neorealists Rossellini and especially Visconti maintained their position for a long time. Italian film received a new formidable boost when Federico Fellini and Michelangelo Antonioni broke through. Both dealt with materialism, nihilism and lack of communication among postwar people, Fellini in films such as Le notti de Cabiria and La dolce vita (The Sweet Life, 1959), Antonioni in the trilogy L’avventura (The Adventure, 1959), La notte ( The Night, 1960) and L’eclisse (Fever, 1962). Lyricist and author Pier Paolo Pasolini debuted with Accattone(1961), and in the 1960s became the subject of much international attention. A number of Italian actors were now internationally prominent, including Anna Magnani, Giulietta Masina, Silvana Mangano, Monica Vitti, Sophia Loren, Gina Lollobrigida and Marcello Mastroianni. But economically, Italian film was in crisis. The largest producers, Dino De Laurentiis and Carlo Ponti, went on to make films for American companies, and American capital financed a number of Italian films in the 1960s. The Italian film industry also had revenues from US major films, e.g. William Wheeler’s remake of Ben Hur(1959), which was recorded in Italy due to the lower cost level. Co-productions also became more common, especially with France. In the early 1960s, film production was on the rise, reaching its peak in 1964 with 313 films.

A peculiar phenomenon of the time is the so-called “spaghetti westerns”, nihilistic and violent films recorded in Italy or Spain with American and European actors. Among the best known are Sergio Leone’s trilogy Per Un Pugno di Dollari (For a Few Dollars, 1964), Per Qualche Dollaro in Più (For A Few Dollars More, 1965) and Il buono, il gross, il cattivo (The good, the Evil and the Cruel, 1966).

From 1970, the presence of Italian films on the international market went down. To a greater extent than in many other countries, cinemas in Italy were outperformed by television, the number of films dropped and there was little access to new regal centers of real format. The state-run television channel RAI has provided assignments to the most significant directors in the form of television productions that have often been staged abroad. Key names in the 1980s were veterans such as Fellini, the Taviani brothers, Scola and Rosi, but a new generation of film directors also gained great popularity, many of them through their touch with comedy or lighter film genres: Maurizio Nichetti, Massimo Troisi and Pupi Avati. Giuseppe Tornatore had great cinema success with the cinema -ostalgic Cinema Paradiso(1990) and Gabriele Salvatores were noted with Mediterraneo (1991); both won Academy Awards. In the 1990s, Gianni Amelio sailed as a significant name with Porte aperte (Open Doors, 1992) and Lamerica (1995), Tornatore garnered much attention with L’Uomo delle stelle (Stars Man, 1995) and Roberto Benigni won the Oscar for La Vita è bella (Life is glorious, 1997). Nanni Moretti has since made his mark internationally with Caro Diario (Dear Diary, 1994) and La Stanza del figlio (The Son’s Room, 2001). 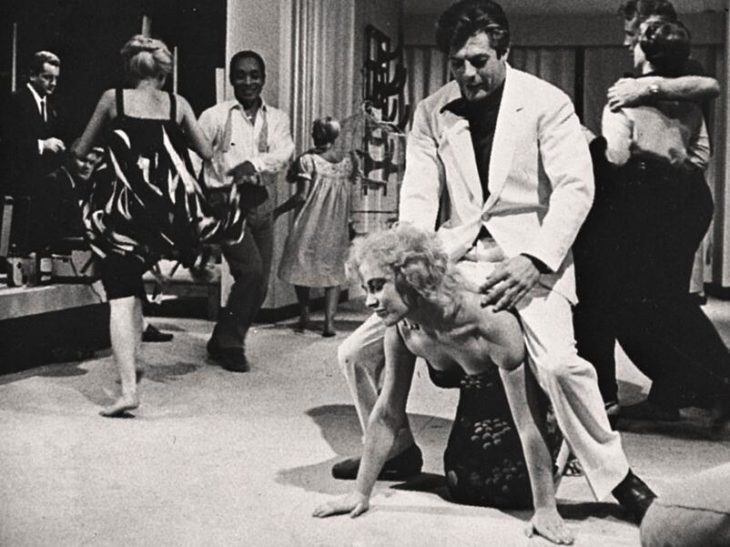