Between the end of February and the beginning of March 1961 the curious episode called “Santa Maria” occurred. With this name it was called a passenger ship under whose command was the dissident captain H. Galvao. The latter seized the ship at sea and diverted it to the port of Recife where he delivered it, without incident, to the Brazilian authorities who returned it to the Portuguese company. This whole operation had served to draw public attention to the state of affairs in Portugal, forced to suffer the Salazar regime. Which regime, either because of the low turnout, or because of galloping illiteracy, was confirmed by the elections held on November 12, 1961.

According to Abbreviationfinder, an acronym site which also features history of Portugal, the opposition went underground while other problems thickened over the Salazar regime. And these problems began with the independence movements of the colonies; Angola began, followed by Guinea-Bissau in 1963 and the following year by Mozambique. Until then Salazar had done nothing to make life more bearable for the natives; but when he could see everyone’s determination to close the Portuguese domination in those territories, he promised investments, created the escudo area, stimulated emigration to overseas and greatly improved the living conditions of the residents.

This program over time weighed heavily on the state budget which was then forced to depend on international financial groups and other powers. In addition, the United Nations deplored, together with the non-aligned and the socialists, the behavior of Portugal, which also lacked the support of the Catholic Church.

In exchange for aid from the United States, France and the Federal Republic of Germany, Portugal ceded their military bases. Then in 1966 China intervened to resolve the Macau problem over which Portugal lost control and sovereignty. All this negatively affected the economy. Meanwhile, public works had begun for the construction of the spectacular bridge over the Duero in Porto and the one over the Tagus in Lisbon, which absorbed most of the finances, causing a very strong deficit in the state budget.

On 16 September 1968 Salazar was struck by a cerebral hemorrhage and, no longer able for government functions, he handed the hand to MJ Das Neves Alves Caetano, his former collaborator, but for years resigned and far from political scenes.

He began by changing the name of the single party which since then was called the “National Popular Association”, and of the political police who called themselves the General Security Directorate.

Then the number of ministries was reduced and several ministers were replaced. Thus the censorship and control over trade union and professional associations eased; a university reform was completed and repatriation was granted to all exiles.

But the renewal was not completely satisfactory. Many difficulties in various sectors, from economic to health, were insurmountable due to the powerful bureaucracy present in the country. In the 1969 elections, the oppositions could express their will just a little better than the previous times, but the majority remained with the government.

In July 1970 Salazar died but not the conflicts within the regime. But there was a constitutional revision of the treaties whereby the African countries each acquired the denomination of “state” and equal rights had the Brazilians and the Portuguese.

In July 1972 A. Tomas was re-elected for the second time and an agreement was signed with the European Economic Community for a reciprocal reduction of the customs tariffs in force since January 1, 1973. In 1973 the oppositions withdrew completely from the elections. Caetano attempted a restructuring at the top of the armed forces. On March 16, 1974 there was a coup that failed; but that of April 25 which sent both Caetano and Tomas into exile did not fail. The single party was immediately abolished; General A. de Spinola was elected President of the Republic and A. da Palma Carlos was head of the government, made up of independents and representatives of various parties. This government lasted until July 15 when another was formed chaired by Colonel V. Goncalves. General de Spinola was replaced on September 30 by General Costa Gomes; but then de Spinola attempted a rebellion which was eradicated on 11 March 1975 and he was exiled.

A period of national unrest followed, echoed by the colonial ones. The colonies one by one became independent and the Portuguese colonists returned home en masse. It was feared that a new revolution would come to Portugal but then everything was downsized and 1976 was the year of progressive enunciations.

As a state organ, a Council of the Military Revolution was elected. It was established that the Unicameral Parliament would be elected every 4 years, by the proportional system, and the president of the republic every 5 years, by universal suffrage. The April 25 elections entrusted the majority to the Socialists. The June presidential elections were won by General A. Santos Ramalho Eanes, who entrusted the socialist M. Soares with the task of forming the new government. The administrative elections in December confirmed the current political framework.

The Soares government underwent very demanding work to be carried out, such as: reintegrating all citizens who have returned from both African and European countries; the recovery of production and the reorganization of agriculture. Then he tried to fix the finance deficit by asking for loans from the United States and the European Economic Community and various international bodies.
In December 1977 there was a government crisis. The next one was two-tone, made up of socialists and Catholics, always led by Soares, who resisted attacks from the right until July 1978.

On 25 October 1978 the Parliament accepted the government formed by CA Mota Pinto, but until the crisis of spring 1979.
Eanes, after a very short time, dissolved the Parliament and on 3 January 1980 the new center-right government was formed, advocating the Democratic Alliance, headed by F. Sa-Carneiro.

This government had a very difficult period; Sa-Carneiro perished in a plane crash and then in January 1981 another government was formed by the Social Democrat F. Pinto Balsemao.

Alternate phases took place in the political and economic situation of Portugal and in August 1982 a first step was taken for the privatization of some industrial sectors.

In January 1986 Portugal entered the European Economic Community. In February Soares was the new president of the republic and held office even after the 1991 elections.

In April 1992 Portugal joined the European Monetary System and in December Parliament ratified the Maastricht Treaty.

In 1993 the already difficult economic situation worsened and in December the administrative elections widened the extension of the Socialist Party to Lisbon and Porto.

The rise of the Socialists continued also in 1994 on the occasion of the elections for the European Parliament and then again in the Portuguese political elections of 1995, to which they had presented themselves with a program certainly more far-sighted than that of the Social Democrats.
The new one-colored government was chaired by A. Guterres, head of the Socialist Party.

Another socialist victory occurred in 1996 in the presidential elections which were the preserve of J. Sampaio.
The socialist government, in agreement with the unions and entrepreneurs, developed an economic program that envisaged a 5% increase in minimum wages and a reduction in working hours.

In 1997, with the agreement of the oppositions, extensive institutional reforms were developed to reduce the number of parliamentarians and to transform the armed forces into an army of professionals. 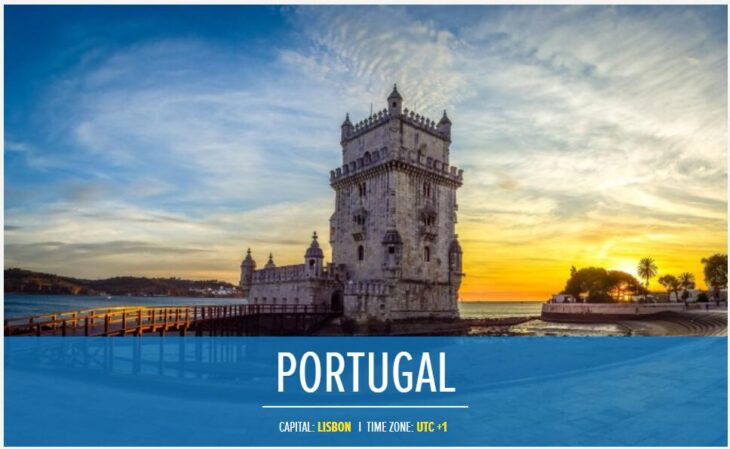 Furthermore, again with the approval of the opposition forces, administrative decentralization was planned. It provided for the establishment of 8 regions with broad powers. The latter proposal was submitted to popular approval through a referendum that took place in November 1998. For this occasion, the right-wing forces had been strongly activated focusing their campaign on the theme of national unity, which they believed to be in danger. For this reason the referendum led to the rejection of the project. For all the government’s work, however, popular trust remained and this was expressed in the legislative decrees of October 1999, where the Socialist Party obtained 44% of the consents and Guterres remained Prime Minister.

In the international arena, Portugal’s policy was aimed at improving relations with all western states more and more. On the other hand, relations with Indonesia continued, which at the time had forcibly annexed the Portuguese colony of East Timor, which Portugal had never accepted. In order to settle the matter, everything was examined by the United Nations, which promoted a popular referendum for independence, to be held in August 1999. Instead, in December 1999 the territory of Macau returned to China, its motherland.