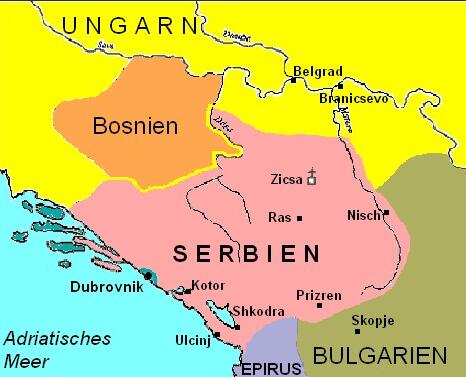 Serbia’s medieval history was marked by the establishment of a Serbian kingdom and the subsequent fall under Ottoman rule, which would last into the 19th century. In the 6th century, Slavic peoples, coming from the north, settled on the area of today’s Serbia, which at that time belonged to Byzantium, the Eastern Roman Empire. The Serbian rulers Stefan Nemanja and Stefan II established a Serbian principality in the southern Balkans between 1184 and 1216 and broke away from Byzantium, and in 1217 it became a kingdom. A separate Serbian Orthodox Church was established. The Kingdom of Serbia expanded in the 14th century to the area of the later Kosovo, impressive monasteries and churches were built in the Byzantine style (Gračanica, Dečani, Peć) and the empire experienced its economic and cultural heyday. The center of the empire was in what is now Kosovo. King Stefan IX Dušan enlarged the empire to include Macedonia and Thessaly and in 1346 assumed the title of Tsar.

After the defeat of the Serbs against the Ottomans (Turks) in the Battle of the Blackbird Field (Kosovo polje) in 1389, the Greater Serbian Empire fell apart. The exact details of the military conflict are still unclear. Regardless of this, this event became the founding myth of Serbian nationalism in the 19th century, which was later to be revived in the run-up to the Balkan wars of the 1990’s. After further battles, Serbia becomes a province of the Ottoman Empire in 1459. In the middle of the 16th century the entire Balkans up to central Hungary were under Ottoman rule.

The Ottoman social system was firstly shaped by a tradition of multi-religious coexistence, which is secured by the institutions of the Millet system. It guarantees autonomy for non-Muslim communities and thus enables the preservation of the Serbian culture and Orthodox religion, the popular stories about the Serbian kingdom, which later become the basis of national historiography. In 1557 the autocephalous Serbian Orthodox Patriarchate of Peć was reestablished rising to the center of Serbian Orthodoxy. In the 16th and 17th centuries there was gradual Islamization, especially of the urban population – most Serbs cling to Orthodox Christianity. Second, the Ottoman rule shaped a much “milder” feudal system compared to Western Europe with lease rights for the peasant farmers and relatively lower tax burdens. From the 18th century onwards, his crisis led to a blockade of modernization and to peasant revolts among the Serbian rural population. In 1689/90 Habsburg troops temporarily penetrated into Kosovo, Albanian and Serb rebels join them. After the military defeat, they flee with the Austrian troops, which accelerates the ongoing Serbian migration from the area of Kosovo to today’s core Serbia.Great hike (seobe) known. There were further Habsburg advances in the 17th and 18th centuries and Belgrade was temporarily taken.

According to aristmarketing, in the 19th century, the Serbian people were the first of the South Slavic peoples to achieve (de facto) state independence and consequently dominated the first common state at the beginning of the 20th century. In 1812, several revolts of the peasant Serbian population led by Prince Karađorđe and with the support of Russia led to Sultan Mahmud II granting partial autonomy to the province of Serbia; In 1830 the formal self-government followed under Prince Miloš Obrenović. As part of the state reorganization of the Balkans, Serbia was given state independence at the Berlin Congress in 1877/78. Prince Obrenović declared the country a kingdom in 1882, he became its first king – a succession of kings of the two dynasties Obrenović and Karađorđevic began, which would last until the Second World War. In the Balkan Wars of 1912/13, Serbian and Montenegrin troops conquer Kosovo, Macedonia and northern Albania. Historically, this is where the first forms of “ ethnic cleansing” occur”. At the end of the war, the major European powers approved a previously proclaimed Albanian principality, albeit excluding the areas of Kosovo and Macedonia, where half of all Albanians live. The first Serbian state of the modern age is characterized by a broad peasant population, the dominance of the state through an emerging military bureaucracy and an even thinner class of educated middle class. His representatives, such as the language reformer Vuk Karadžić, import the idea of the “nation” from Western Europe into the largely pre-modern Serbian social context. There, nationalism takes on predominantly ethnic-reactionary forms, with hegemonic tendencies towards other ethnic groups in the region, which at the beginning of the 20th century. racist undertones. Citizenship-oriented nation concepts remain marginal. The first attempts at a parliamentary democracy remain weak in view of the lack of civility.

On June 28, 1914, members of the Serbian terrorist group “ Black Hand“The Austrian Crown Prince Franz Ferdinand in the Bosnian Sarajevo in an assassination attempt, Austria-Hungary declares war on Serbia – the beginning of the First World War. In Kosovo in 1915 Austrian troops force the Serbian army southwards and are supported by the Albanian population; After the defeat of the Habsburgs and the return of the Serbs, there were bloody acts of revenge against Albanians. In the impending collapse of the Danube Monarchy, political negotiations about a merger of the southern Slavs take place; South Slav federal and Greater Serbian state concepts collide. In 1918 the “United Kingdom of Serbs, Croats and Slovenes” (including Bosnia-Herzegovina and Macedonia) becomes the 1st Yugoslavia proclaimed under the leadership of the Serbian dynasty.

Due to the Serbian hegemony, conflicts between Serbs and Croats and between the different denominations are inevitable. The adoption of the centralized ” Vidovdan Constitution” in 1921 exacerbated the Serbian-Croatian constitutional conflict that dominated the state, which resulted in the shooting of the leader of the Croatian Peasant Party, Stjepan Radićescalated in the parliament in Belgrade and the split in the parliament. The instability of the state, society and economy are due to the legacy of different feudal systems, backwardness and conflicting nationalisms, especially those of the Serbs and Croats. This condition is not improved by the intervention of King Aleksandar Karadjordjevic, who in 1929 suspended the constitution, transforming the state with the help of the military in a royal dictatorship under the name “Kingdom of Yugoslavia” and an arbitrary restructuring of the country’s so-called. Spell properties (banovinas)undertakes. In the chronic weakness of state and politics, the government overthrew Germany, Italy and Japan in 1941 after the decision to join the Tripartite Pact. The coup in Belgrade leads to the attack of the Axis powers on Yugoslavia, the country sinks into the chaos of the Second World War.