The large Channel Islands Jersey and Guernsey and the smaller islands Sark and Herm score with cliffs, great beaches and romantic cultural and park landscapes, but also with pretty towns, old lighthouses and prehistoric passage graves. Our TOP 10 sights on the Channel Islands tell you what you should definitely see. 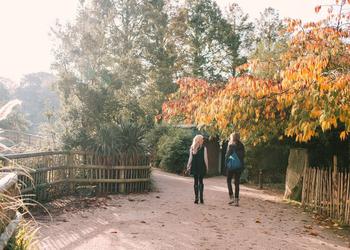 The zoo was founded in 1958 by the English naturalist Gerald Durrell. However, it is not a zoo in the traditional sense, but an animal park that has always focused on the preservation of rare and endangered animal species. The spacious park invites you to linger and observe the more than 130 animal species. Many of the animal species taken there are threatened with extinction. The aim of the zoo is to reproduce these animals and, if possible, to release them back into the wild. The gorillas and orangutans are particularly impressive. 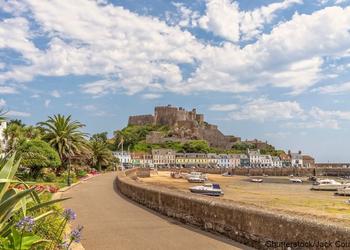 The imposing castle is located above the port town of Gorey with its picturesque houses. The construction of the castle began more than 800 years ago and is a splendid example of medieval fortress architecture. The castle was considered impregnable for a long time. Only with the advent of cannons did the castle’s weaknesses come to light. Parts of the wall and towers were too weak to withstand the cannon fire.
Visit the castle and explore the network of stairs, towers and rooms. With good visibility you have a wonderful view of the French coast.

The La Houge Bie megalithic complex is one of the largest passage tombs in Great Britain. This tomb was built around 4,500 years ago. The approximately eleven meter long corridor, the two meter high main chamber and three side chambers are made of granite stones.
The grave lies under a 14-meter-high cairn on which two chapels stand: The Notre Dame de la Clarté from the 12th century and the Jerusalem Chapel, commissioned in 1520.
The complex also has an interesting archaeological exhibition. 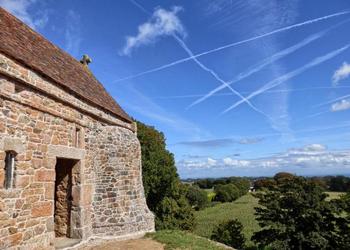 This lovely town house, located in St. Peter Port, was bought in 1856 by the French writer Victor Hugo. Here he lived in political exile after Louis Napoleon’s putsch in France until 1870 and also completed his novel “Les Miserables” here. Victor Hugo had the house rebuilt and furnished according to his designs. Parts of the house and the beautiful garden can be visited today. 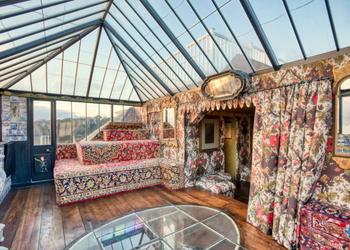 The small island is just 5 km from St. Peter Port on Guernsey. With its approx. 1.5 square kilometers, this little paradise has already won the “Britain in Bloom” flower competition twice. It is worth visiting Shell Beach on the north coast, where more than 200 species of mussels can be found. There are breathtaking cliffs on the south coast. Herm can be reached from St. Peter Port, Guernsey. 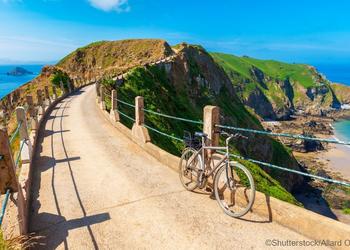 The island of Sark is the smallest of the four main islands of the Channel Islands with about 600 inhabitants. But it is considered one of the most beautiful. Politically, it belongs to Guernsey, but is largely autonomous. The best way to get to Sark is from Guernsey. A pedestrian ferry to Sark leaves from St. Peter Port. A steep climb from the harbor leads to Collinette, the main town on the island. All places on Sark can be easily reached on foot or by rental bike. But there is also the possibility of exploring the island by horse-drawn carriage. There are no cars on Sark, but there are more tractors. Little Sark is also worth seeing – a part of the island that is connected to Sark by the narrow headland of La Coupee. In order to get to know Sark and its inhabitants properly, a stay that extends beyond a day trip is worthwhile. 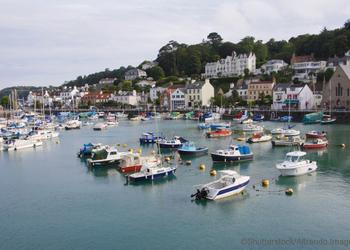 Located at the end of St. Aubin Bay, this small town is a gem. There isn’t much to see here, but the relaxed atmosphere in the former pirate’s nest invites you to stroll around the harbor, to the yacht club and through the small alleys of the old town with its historic houses. Have a Liberation Ale, the island beer, in the pub or enjoy a seafood platter in one of the restaurants. 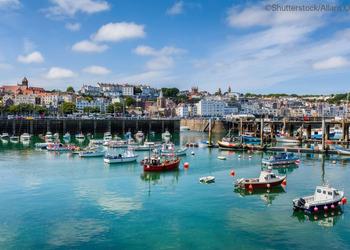 The capital of Guernsey is considered one of the most beautiful port cities in Europe. The Old Quarter with its galleries, boutiques and restaurants is well worth a visit. You should also visit the Town Church, the chapel of which was completed in the 15th century. The 800-year-old Castle Cornet is located on an offshore island, connected by a pier. A cannon shot is fired from here every day at twelve o’clock sharp. For relaxation, head to the Candy Gardens, Victorian gardens with an ornate greenhouse from the 18th century. The poet Victor Hugo lived in exile in the Hauteville House from 1856 to 1870. 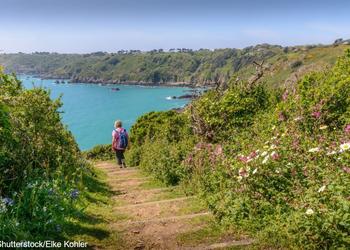 The cliff walks in the south and south-east of Guernsey and in the north of Jersey are lined with wildflowers and impress with their cliffs and small bays.
The Moulin Bay on Guernsey was the destination of the painter Renoir as early as 1883, who immortalized the view of this bay in a total of 15 paintings. There is the possibility of doing circular hikes, which also lead along the coast or to hike along the “cliffpaths”. It is important to wear sturdy shoes.

One of Jersey’s most famous landmarks. The lighthouse is the first concrete lighthouse in the world. It was put into operation in 1874. Its name is derived from the French word “Corbeau” (raven). A bird that is often considered a bad omen. Before its completion, ships that had strayed from the fairway were often smashed at this point by an extreme tidal range and rugged rocks.

The lighthouse is within walking distance at low tide. A siren announces the tide. Then it’s time to head back. It is really a spectacle to watch how quickly the path disappears into the sea.

The tower can best be reached from St. Aubin, both on foot and by bike on the Corbière Walk, along a disused railway line. A visit at sunset is recommended.