Asia was considered in Greece from around 500 BC. as one of the three continents. The borders with Europe and Africa were usually drawn by the river Don and by the Suez. Knowledge of Asia, however, was limited to the westernmost regions; the more remote areas were unknown and shrouded in myth.

The division of the globe into continents has been maintained since antiquity. It is a conventional division that corresponds to the view from the eastern Mediterranean, but Asia does not in itself constitute a unit with a common history and common identity. The different regions within the vast continent live and have lived under vastly different natural and cultural conditions and have lived through vastly different historical courses.

Only seen from the outside, i.e. from the West, one has tried to perceive this diversity as a unit and tried to demonstrate features or historical experiences as common to all or large parts of the continent. The history of Asia is thus both the story of the generalizations that have been formulated in the West over time, and a contemporary attempt to formulate such generalizations.

The oldest written sources for the history of Asia and thus the oldest known written sources at all are clay tablets described in cuneiform from Mesopotamia, approximately 3000 BC Alphabet writing was developed in the Middle East from approximately 1000 BC, and they came to form the basis of the fonts that have been used and are used in South, Southeast and most of Central Asia. According to Countryaah, China is the largest country in Asia and the Chinese characters were developed from 2000 BC  and took their final form in the centuries around the birth of Christ. There is thus a rich written material, but the nature and transmission of the source material is often quite different from that known by historians from European history, and the linguistic diversity precludes any single human being from gaining a direct knowledge of sources throughout Asian history.

The interest was first directed towards the oldest Middle Eastern history, which for a long time was merely considered a prelude to the “real history”, the European. This Eurocentric view of history has since been abandoned. No one will doubt that Asian regions, cultures and nations have a history that is in itself of interest both to the individual peoples and to the understanding of the overall history of mankind.

The view is also abandoned that all higher cultures have one common core, Egypt or Mesopotamia (Iraq). Agricultural cultures have emerged in different parts of the world since the last ice age, but among the areas that by virtue of agriculture were able to carry a denser population and more differentiated social structures with cities, states, written languages, etc., a few emerge that in a complex interplay with adjacent areas and with each other has formed the core of historical development. In Asia, three such core areas stand out according to Countryaah: the Middle East, China and India. Among them, Middle East consists of 16 countries.

The agricultural cultures for approximately 500 AD

The Middle East emerges at the beginning of historical times in the last millennia BC. as the most complicated and differentiated area. The interaction between mountain and valley and between river plains, highlands and steppes counteracted the formation of a uniform culture or a united empire. The land between the Euphrates and the Tigris, present-day Iraq, had the opportunity to feed the densest population as a result of irrigation, but was also most open to outside attacks, and the efficiency of irrigation systems depended on a stable state power. If ducts and dams were not constantly maintained, major damage to the irrigated soil could quickly occur.

The most stable empires ruled both highlands and river plains. Large parts of the Middle East were between approximately 1200 and approximately 600 BC subject to Assyria, whose center of gravity was the mountainous northern part of present-day Iraq. After the collapse of the Assyrian Empire around 600 BC. moved the political center of gravity eastward to the mountains between Iraq and Persia and to the Persian plateau with the first Persian empire under the Achaemenids from 550 BC. Despite the attacks from the west after 334 BC. under Alexander the Greatmost of Iraq and Iran remained united under the Hellenistic Seleucids (until 64 BC), the Parthians (until 224) and the Sasanids (until 643). During this long period, a Persian (Iranian) administrative tradition was created, which was largely maintained or imitated during the later Islamic empires of the Middle East and India.

China’s earliest agricultural crops around the Yellow River, Huang He, had their economic base in intensive wheat and millet cultivation. During the expansion of the last two millennia BC. this culture came into contact with two completely different geographical zones. In the north and west, the land suitable for arable farming was gradually replaced by the more rain-poor steppe, the homeland of the nomads. To the south, especially in the Chang Jiang Valley, the climate was warmer and more humid, but the land was covered with dense forest that had to be cleared to enable intensive cultivation of rice, which eventually became the main crop. The expansion to the south took place at the expense of older peoples who were incorporated into Chinese culture or were displaced.

During this process, the area was split into smaller principalities; it was therefore a decisive turning point when China in 221 BC. with the Qin Dynasty gathered in one kingdom under an emperor who was not only militarily superior, but implemented a series of reforms that were essential to the future unity of the kingdom – including standardization of currency, dimensions and weight and not least of the Chinese written language. At the same time, the interconnection of older fortifications to the north and west, which would eventually become the Great Wall of China, began.

The Qin Dynasty had only a short life, but during the Han Dynasty (202 BC-220 AD), imperial unity was maintained, and Chinese expansion continued, not only with the inclusion of new territories in the south, but for the first time also with conquest and domination. of the oases along the caravan routes all the way to the regions east of the Caspian Sea – the trade route that, under the name Silk Road, connected the westernmost and easternmost parts of Asia.

India was in the northwest from the end of 3000. home to an urbanized farming culture, the Indus culture, comparable to the contemporary Mesopotamian culture. Perhaps due to changes in the course of the Indus River, perhaps as a result of clashes with Indo-European-speaking immigrants from the north (the Aryans), this culture perished towards 1500 BC. The language of the people has not yet been able to be read, but presumably a Dravidian language has been spoken. The Indo-European peoples became the leaders in the clearing of the forest that covered the fertile North Indian plain, especially after they from approximately 1000 BC began to make use of iron tools. It was these peoples who gathered the first states known from India, and the oldest Indian literature is written in Indo-European languages. The expansion took place in constant interaction with the elderly,

It was also from the South Indian area that the Indian culture came to exert a strong and lasting influence in South-East Asia. The connection was opened by merchants and seafarers from India, and inscriptions in Sanskrit from the centuries AD. shows strong Indian (Hindu) influence on the earliest Southeast Asian kingdoms in present-day Myanmar, Thailand, Vietnam and Cambodia. Although Southeast Asia has since come under strong influence from the north – partly through direct contacts with China, partly through the immigration of peoples who were displaced from China during Chinese colonization to the south – Indian features have remained essential elements in Southeast Asian cultures.

The larger contiguous areas of Asia, particularly suitable for agriculture, are found along the coasts to the west, east and south. In the centuries surrounding the birth of Christ, all the most suitable areas were home to densely populated agricultural cultures. To this were added parts of Central Asia, where, despite uncertain rainfall, there could be a basis for fairly dense agricultural communities around natural oases, rivers or irrigated areas.

Communication between the densely populated agricultural areas was made difficult until the 1900’s. of natural barriers, mountains, deserts and seas, and therefore the population of the world has lived through most of its history in ignorance of the extent and population of the continent. Every single cultural area, every “human anthill” lived its own life. Nevertheless, there have always been cultural connections between the most remote parts of the continent, albeit indirect and slow. There are clear examples of spontaneous development of vastly different solutions to the same problem in different cultures, but there are equally clear examples of material or intangible cultural features being horizontal over long distances and having been adapted or absorbed in distant areas.

Throughout history, two possibilities have been open to contact between Asian cultures: the Central Asian steppe and the sea. The period from approximately 500 to approximately 1500 became, rather than any other period, the time of the steppes and nomads in the history of the continent, when man – especially after the introduction of the stirrup in the second half of the 1000-t. – learned to take advantage of all the horse’s opportunities both in war and in peace. 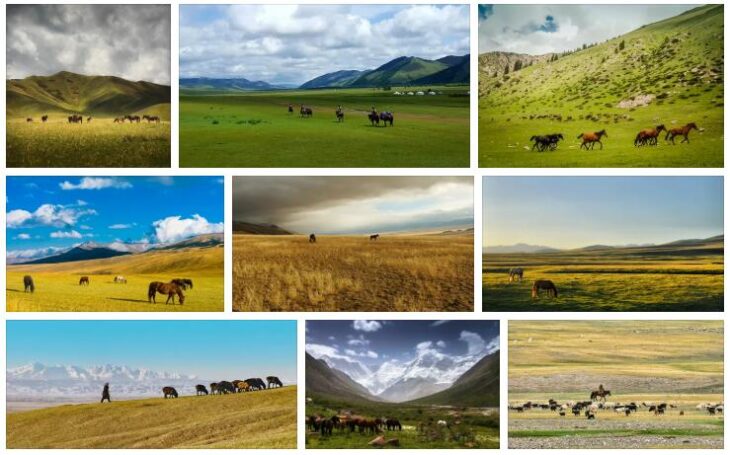 The Central Asian steppe country is, for climatic reasons, only to a limited extent suitable for arable farming and thus for closer settlement; on the other hand, it is suitable for cattle breeding and has from a very early time been the home of nomads. To the north and northwest, the steppe country is bounded by a forest belt, to the south by mountains or desert, and only in the east and southwest does the steppe land pass without natural barriers into the densely populated agricultural areas of China, Iran and southern Europe.

Between the cattle-farming nomads and the settled peasants there was to a large extent a symbiotic relationship; the nomads made use of land unsuitable for farming, and gladly traded in their products for the farmer. The nomads understood the cargo and riding animals that enabled communication between distant lands. In addition to the symbiotic, however, there was also an oppositional relationship that reflected the vastly different living conditions. The farmer was especially in areas with irrigation tied to a particular place and dependent on peace and security. The nomad was dependent on freedom and movement, and on still wandering he had to follow the grazing with the seasons with his animals and had to be set on the battle for the best pastures.

Exactly when the nomads learned to utilize the horse as a riding animal is not known. In 1000-tfKr. the horse was used militarily, pre-tensioned tanks, and it is a military technique that is primarily associated with the more developed agricultural areas. First from 800-tfKr. we encounter more extensive use of the horse as a riding animal – yet without stirrups. From 600-tfKr. the Middle East was attacked by prepared nomads and from 300 BC. China. For the history of China, these early nomadic attacks gained crucial importance, as it was with the use of the nomadic fighting technique that China gathered during the Qin Dynasty in 221 BC.