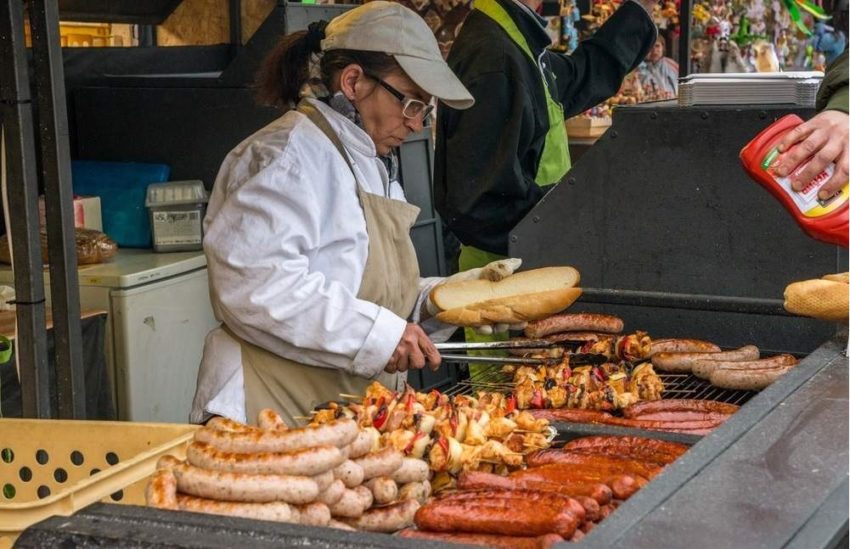 A quick trip through the center of Prague is enough to understand the importance that gastronomy has in local culture. This is because, along the way, it is impossible to remain indifferent to the aroma of sausages and pork roasting over hot coals, let alone resist  trdelník , sweet bread baked on a spit, among other delights.

Street food is really something very common in Prague and is part of the experience of the tourist who visits the city. The good news is that, in addition to trying these and other delicious delicacies, the visitor spends less than if he went to a conventional restaurant. A French type bread (however huge), with paprika sausage and mustard or ketchup, for example, costs around 70 CZK. Traditional trdelník – without the nutella or ice cream filling – costs between 70 and 80 CZK.

Eating in Prague’s restaurants and cafes, however, is also not out of this world in terms of prices. In less touristy places, you can pay around 150 CZK on a lunch menu, while the full dinner for two people – in restaurants close to points like Old Town Square and Charles Bridge – should cost from 500 CZK , including alcoholic beverages.

What and where to eat in Prague

We visited the Mlejnice restaurant   for the first time in 2011 and, upon returning in 2017, we found that the food was still delicious and the prices super affordable, even though it is a restaurant located in the tourist area.

This time, we splendid with a roasted duck leg, with the meat “dropping from the bone”, accompanied by potato dumplings and sauerkraut. To accompany the meal, a mug of the famous Pilsner Urquell beer  (made in the Czech city of Plzeň) and, for dessert, apple strudel with ice cream. For this meal, we paid 340 CZK, equivalent to R $ 42.51 in the daily rate and without tips. The tip is to book early – by phone only – because the place is busy!

Another delight that you cannot fail to try in the Czech Republic is the goulash, a hearty and hearty meat stew, usually served with bread dumplings. During our stay, we tried the Mincovna restaurant / brewery  , which is just a few steps from the Old Town Square. For the meal, which also had a  steak tartare  for starters , we paid 390 CZK without tips, more or less R $ 54.

Schnitzel – breaded, fried and super-crispy pork or veal – is also popular in several European countries, including the Czech Republic. In Prague, a good place to try it is  U Supa, which calls itself the oldest brewery / restaurant in the city. For the generous (in size) schnitzel there, accompanied by mashed potatoes, we paid 279 CZK – the equivalent of R $ 38 – plus a 500 ml mug of beer, which cost 29.50 CZK.

Other classics of Czech gastronomy, such as rabbit stuffed with smoked bacon and beef cheeks with red wine, are served at  U Medvídků, whose brewery was founded in 1466. The main dishes of this very traditional Prague brewery and restaurant cost from 169 CZK (R $ 23); when visiting the site, be sure to try the original Budvar.

To close this list of restaurants with a golden key, we could not fail to mention an establishment that can be found at various addresses in the city and is very darling of the locals. We are referring to  Lokal, a place that surprised by the quality of the food, the beer and the environment.

On the day we were at  Lokál U Bílé kuželky, in Malá Strana, we tried a very crispy schnitzel and also a steak tartare served with fried bread and a separate garlic clove, to rub on the bread. In addition, the beers there are a separate chapter and tend to please all tastes. Reservations at Lokal can be made over the phone.

But if you are passionate about sweets, you will probably enjoy visiting the  Café Louvre, opened in 1902 and which has already been frequented by the writer Franz Kafka and even Albert Einstein. The coffees and pies in this super-charming place are simply divine, including the creamy chocolate mousse, but the Parisian-style cafe also has a menu full of local delicacies, including goulash.