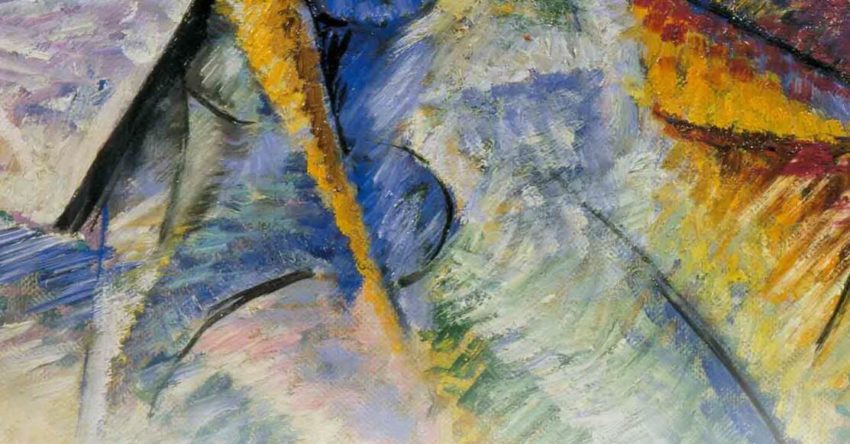 Italian art in the 20th century has played out against a historical background of continuity and heaviness. The historical presence is noticeable in several of the art directions. Even the more rabid and formally subversive art reveals sophisticated artistic approaches that require familiarity with art history. The historical heaviness meets us, among other things, as a backdrop in Giorgio de Chirico’s metaphysical paintings around 1910, and as a showcase for much of the arte povera art, over fifty years later.

In addition to the historical heritage, in Italy, there has been a significant difference between the north and the south, and more locally between rural and industrial and commercial centers, throughout much of the century. These contradictions were reinforced through the modernization of the country, which only towards the end of the 19th century had become a unified state. The big change throughout came with the machine age; the transport and communication systems were radically changed. The gathering of people in larger cities caused many to be exposed to a very different and dynamic way of life than the rural life had provided. 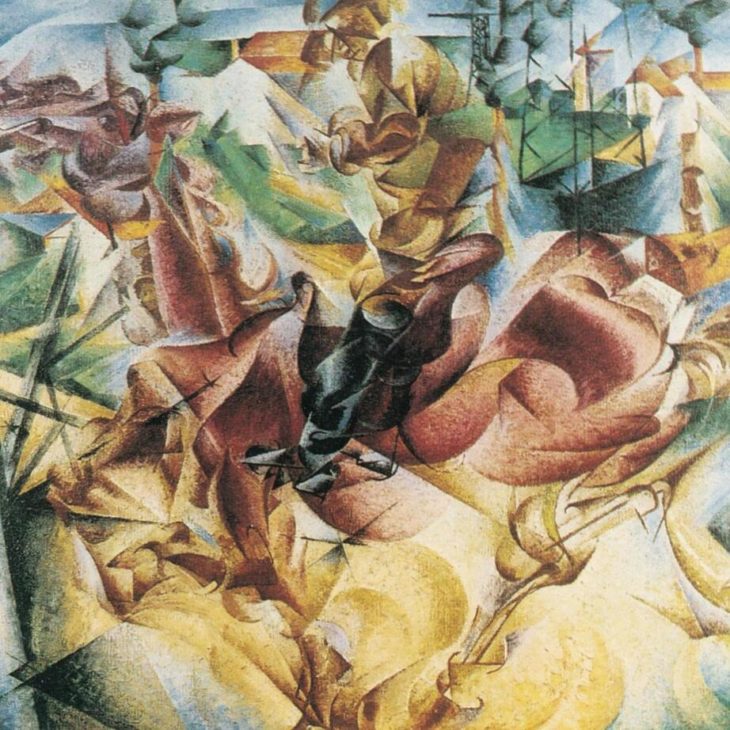 With futurism, Italian art again became groundbreaking. The direction emerged around 1910, seeking to provide a comprehensive picture of modern life with its harsh mechanization, of the dynamics of the time and the rushing rhythm. We see Umberto Boccioni’s painting Electricity (1912). Riccardo Jucker Collection, Milan.

Two new art directions were created in Italian modernism in the early 1900s: futurism and metaphysical painting. Futurism n received its political and literary manifesto by the poet Marinetti in 1909, and the movement’s painters, Carlo Carrà (1881-1966), Umberto Boccioni (1882-1916), Luigi Russolo, Gino Severini and Giacomo Balla (1871-1958), gave the manifesto a design that was adapted to the visual arts.

The futurists were the faiths of the future, fueled by the dynamism of the city, the power and resilience of the machine, the sport and the weapons of war, creating a whirling fresh art direction. So radical could they be that those like Giacomo Balla furnished the apartment and got custom-made clothing in complex, faceted and dynamic wedge patterns. In her paintings Balla examined the structures of the movement; Particularly famous is Running Dog (1912), a picture of a small dog walking in a leash next to its owner. Similar research was done by Anton Giulio Bragaglia (1890-1960) in photographs; by having a long aperture several stations of simple movements were deposited on the film roll.

Umberto Boccioni’s motive circle was larger than Ballas. He sought to show the invisible lines of power that flow through things, people, and the world around them. Everything was woven into each other. Boccioni could portray the dynamics of a football player, a powerful workhorse, a tram with floodlights strolling down the street, festivities at a restaurant or the construction of large houses.

In the period 1910-1920, the so-called pittura metaphysica (the metaphysical painting) was created. The leader of the direction was Giorgio de Chirico (1888–1978), and among the supporters the former futurist Carlo Carrà. In Chirico’s pictures, the new era is met with a melancholy and anxiety, which also tries to take on the inner shakes brought about by the new psychoanalysis. When de Chirico was to portray his experience of the street, it was by emphasizing its frozen mystery and melancholy. And the new era trains run into a picture room where there are also classic columns and arcades. In Chirico’s paintings from large open spaces with traditional arcades and church towers, there is a tone of anxiety, alienation and sexual aggression that tells of the new man’s experience of life. An artist who Amedeo Modigliani worked in the early 1900s, but from 1906 resided in Paris. 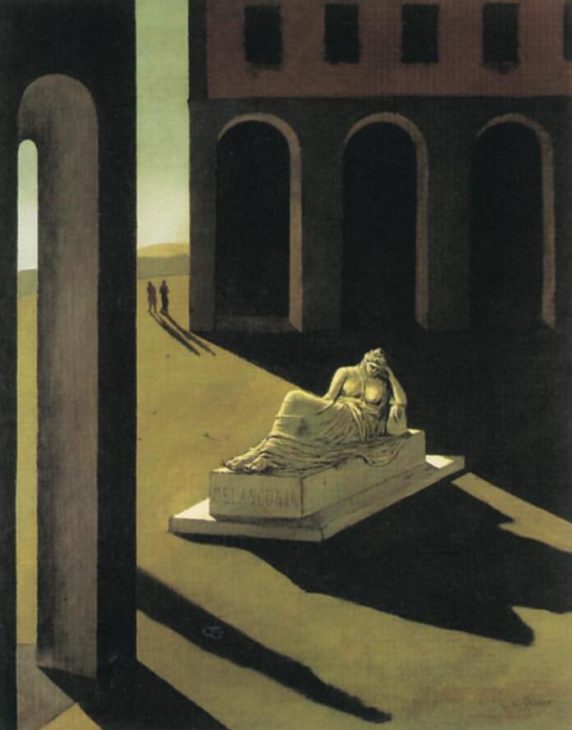 The metaphysical painting (pittura metaphysica) was almost a one-man direction, created and developed by Giorgio de Chirico. In his pictures, the new age meets melancholy and anxiety. The painting Melancholy is from 1914. 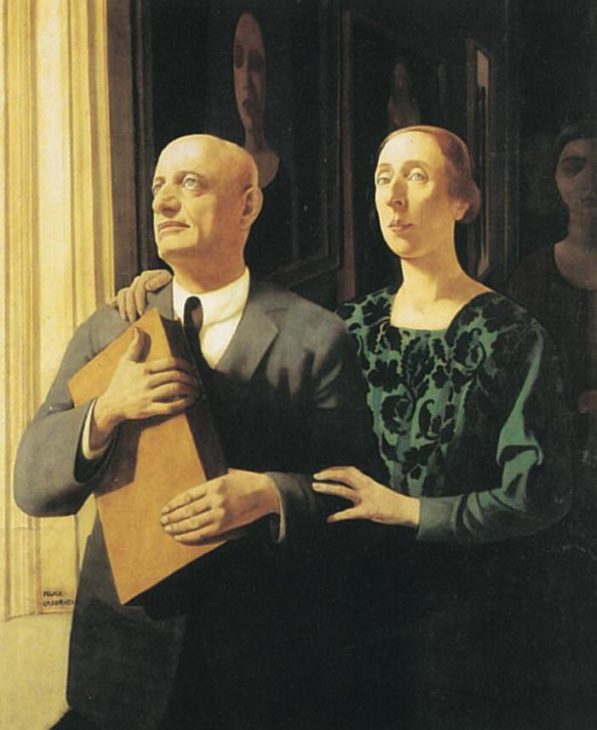 In the 1920s, Italy saw a twist away from the pioneering formal revolution of the previous decades with emphasis on fragmentation and displacement. The feeling of disintegration and shaking in the early part of the century was compounded by the suffering of the First World War. De Chirico was one of many Italians who looked to the past to find an anchor there. This trend was international; even Picasso painted neoclassical pictures in the 1920s. At de Chirico we see this in both subject selection and image construction. The Italian interwar painting sought order and stability, with representations of objects characterized by tranquility.

Giorgio Morandi (1890–1964) concentrated on still life ; simple arrangements of bottles, vases and jars were painted in stable lighting and with controlled, descriptive coatings. In addition to de Chirico and Morandi, several important artists of the interwar period shared this interest in the past. These artists’ works are very reminiscent of the smooth heroic or idyllic depictions of Nazism and Soviet social realism. In Italy, the new age with its alienation, inner turmoil and newer sense of form was never completely abandoned. Their interest in the past could just as well be the visionary El Greco and Pieter Brueghel the elder, as a Renaissance master whoPiero della Francesca. So instead of burning the museums, as the futurists had argued in their youthful haughtiness, the museum was now used as a treasury and renewal well. Of the interwar figurative painters must be mentioned Mario Sironi (1885–1961), Fausto Pirandello (1889–1975), Scipione (1904–1933) and Felice Casorati (1883–1963). The sophisticated and simplistic style of the mature Casorati is called magical realism.

An interesting art historical theme is the relationship between the various utopian and totalitarian ideologies of the interwar period and the flourishing of retrospective styles. In Italy, this can be seen in some connection with the rise of fascism, where a significant painter like Sironi, who united contemporary acceptance with a simple, rigorous formal structure, actually supported fascist ideology.

Similar movements existed in the free countries, such as regionalism in the United States. Thus, the new order of art cannot be unilaterally associated with ideologies, for one finds the same tendency among ideologies that would be perceived as different, such as Nazism and Communism.

At Renato Guttoso (1912–1987), who supported the communists, we also see a union of modern color and motifs of the contemporary with a solid and traditional figure-making. But Guttoso accepted one of the most important requirements of the 20th century for a modern image, namely that it should be without “holes”, so that the image seemed flat and that each part of the canvas had an equal visual strength.

The same tradition-conscious attitude to subject choice and form is also seen in two significant sculptors, Arturo Martini (1889–1947) and Giacomo Manzù (1908–1991). Martini’s figures are made at rest, shown through relaxed bodies and heavy folds. Manzù’s characters have something of the same tranquility and dignity. He worked extensively with monumental metal reliefs, and the motifs were often taken from the Catholic Church’s type gallery. In the interwar period wall-mounted, monumental painting was also made. 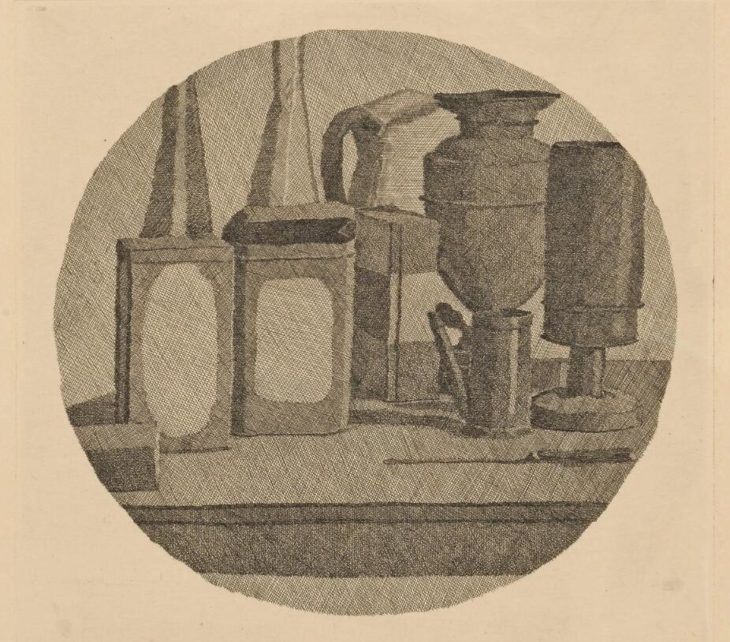 After World War II, many artists in Italy also used artistic means to express their freedom by breaking with ordinary performances. Lucio Fontana (1899–1968) should make his mark on the development not only in Italy, but also in international art. His sculptures from the 1930s show an artist who worked with both traditional figure-making and abstract compositions made up of rectangular blocks. Fontana’s artistic repertoire ranged from clear forms to more expressionist and eruptive expressions. His most important contribution to 20th-century art, however, was his paintings; monochrome canvases pierced and cut.

Inspired by American abstract expressionism, Alberto Burri (1915–1995) in the 1950s performed paintings with both radical and original material use. He could sew together “paintings” of coarse straw or he could draw plastic in strong, clean colors over the blind frame and attack it with fire, so that the configuration was literally burned into the surface. This use of simple materials and the expression of destruction and waste processes have been one of the prerequisites for arte povera in Italy and post-minimalism in the United States.

But between Fontana and Burri and the arte povera there is another distinctive and significant artist, Piero Manzoni (1933–1963). Manzoni’s work is a continuation of modern informal painting and is one of the earliest European examples of conceptual art. His practice has clear commonalities both with the neo- dada art in New York in the 1950s and the new realists in France. Manzoni’s whitish (non-colored) paintings show how the uniform and monochrome surface of Late Modernism can be varied in different materials and with everyday life. In all their simplicity and formal order, they have something unfair and subversive about them. Manzonis stepped into the conceptual approach until the late 1950s, when he began to make his famous lines. They could be several kilometers long, rolled up and placed in round containers inscribed when they were made and how long they were. Manzoni also made art by blowing his breath into balloons. He made pedestals so that all who climbed them became living sculptures, and he produced canned boxes with his own stools, so that the concept of expressionism (expression art ) took on a new meaning. 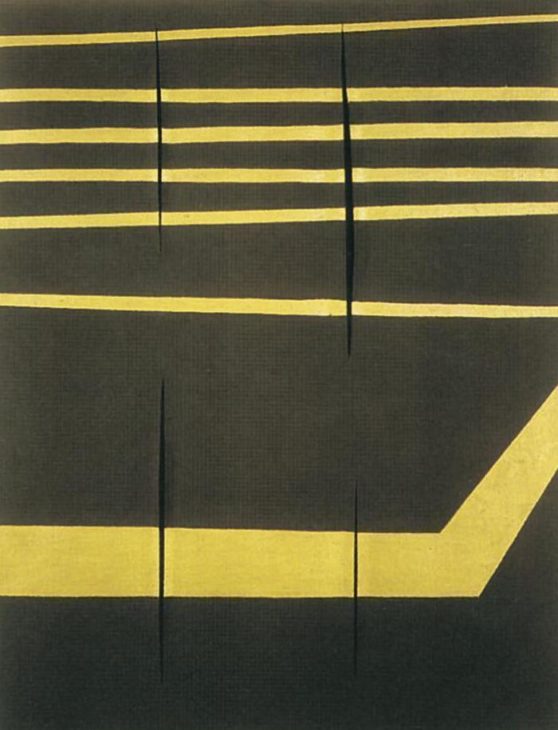 Luciano Fontana is known for his often monochrome canvases, pierced and cut. The picture Spatial concept – expectations are from 1959.

The great movement of artists who worked in the student rebellion spirit and beyond with the exploration of common materials, garbage and other, came with arte povera in the late 1960s. If one of their sources of inspiration was Manzoni, perhaps the greatest single influence was German Josef Beuys. Beuys had long worked to expand the boundary of sculpture, both through installations and by drawing action into the public space as part of the artwork.

Arte povera artists created great works, with a mixture of all kinds of materials; they could even use neon lights, hardware from the building industry, newspaper piles, twigs, steel, coal, oil and tar, fire, cooling elements and ice formations in their works. In its breakthrough phase, arte povera was a strong challenge to the good, late modernist taste. But they did not face any unilateral criticism of the gallery room and the museum. Arte povera works consciously play in the context of the exhibition space, and part of the reason for their great success is the way the simple materials were used in large palaces and rooms that have a traditional and elegant elegance.

Like all installations, kind povera works must be read; you have to move in them, see how the sequences are structured, and try to interpret the characters and the connections that are set up between the different elements. Arte povera works often have a poetic mood and address both the human interior and the world universe. The critic Germano Celant launched the movement and became its first interpreter. Arte povera has had a great and consistent significance in the decades that have passed since they first appeared as a group. Among the most important art povera artists are Mario Merz (1925–2003), Yannis Kounellis (1936–2017), Giovanni Anselmo (born 1934), Michelangelo Pistoletto (born 1933) and Gilberto Zorio (born 1944). There are clear links between American post-minimalism and arte povera, which became evident during several international exhibitions organized in Europe around 1970. 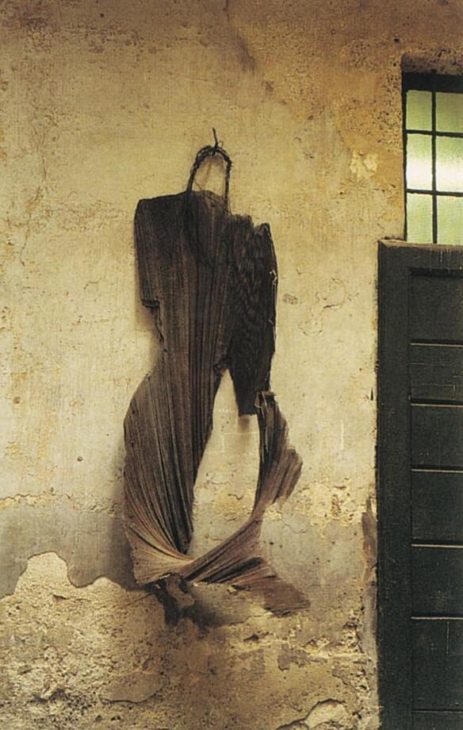 Luciano Fabro’s installation War of Italy from 1981, an example of the Italian art direction arte povera.

Transavanguardia was a direction in visual arts that characterized much of the 1980s international art scene. The direction was part of a larger international decline in painting and the literary and allegorical content of art. The leading spokesman of the direction was critic Anchille Bonito Oliva. Painters like Enzo Cucchi (born 1949), Sandro Chia (born 1946), Mimmo Paladino (born 1948) and Francesco Clemente (born 1952) did the same thing as their “new” colleagues in Germany and the “new image” painters in the United States. They reacted to the intricate and indirect form of conceptual art and to the smooth, elegant and decorative abstract painting. In Italy, the transavant garden can also be seen as a continuation of allegorical and symbolic figure painting.